Coach Peter DeBoer on Panthers GM search: Count me out

Share All sharing options for: Coach Peter DeBoer on Panthers GM search: Count me out 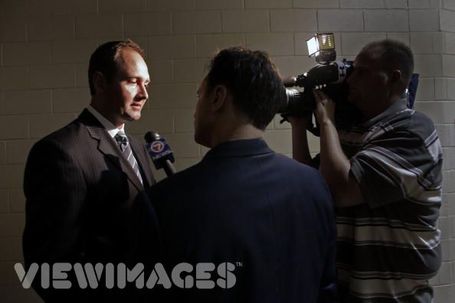 "No, I'm not up for the GM job. I'm still trying to get my feet wet here in the coaching department. That would be too much to ask."

There has been precisely zero speculation the sensational Florida coach was under any sort of consideration for the vacant general manager position (but this is, after all, the Panthers, so everything's on the table).

He's got far too much on his plate getting this club's on-ice performance tweaked and molded into playoff form next season, and quite honestly, he's too smart to accept had it been offered. He knows his weaknesses. Could he grow into and earn a top-flight management spot in the future? Of course. But this is not that time.

It's doubtful Coach Pete had any idea what the score was when he hopped into JM's bed almost one year ago. And now?

"What they've told me, and the general feeling here, is that this isn't a totally broken-down organization. We need some fine-tuning."

That's swell to hear from arguably the most public face of the franchise. What's difficult to accept is that he's the guy having to say it. But consider: would fans prefer news on the state of the team coming from the highly-respected current coach, or club president Michael Yormark?

Jeff Hicks of The (Waterloo) Record spoke with the Panthers coach, linked here.