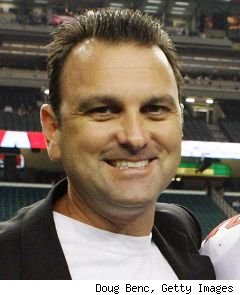 It has been communicated to us that Drew Rosenhaus has been contracted by Panthers fans to negotiate lower season ticket prices. We are aware of this development and are still gathering details. The Florida Panthers have no further comment at this time.

Thus began a bizarre, yet original marketing campaign. Certainly woke me up. It just couldn't be true, right? I share the opinion put forth at On Frozen Pond: "I don't know who hired (Rosenhaus), but I thought ticket prices were pretty reasonable at The Billboard."

See if I've got this straight: Panthers season seat holders have "hired" an NFL super-agent to represent their interest in bringing down ticket prices on their favorite hockey club.

"As a longtime Panthers fan and a person who believes in giving sports fans the value and the atmosphere they deserve, I am absolutely thrilled to represent the Cats faithful at the bargaining table," Rosenhaus says in a press release issued as part of the campaign. "That said, this a unique situation for me to represent the fans as opposed to professional athletes. But as a passionate Cats follower, I’ve got my finger on the pulse of the BankAtlantic Center faithful."

Finger's on the pulse of the BAC faithful. Hmm.

You've got to love this. Really shows a positive, aggressive (dare we say cutting-edge?) attitude that hasn't been present with the organization in a long, long while.

It hasn't been owned up to by the team as a tool, but what a wonderful marketing campaign idea that has attracted tons of attention...and it hasn't even been officially rolled out.

Greg at Puck Daddy summed it up thusly:

Did the tone strike you as a little light? Does the fact that the press release was sent over by KCBS Marketing tip you off about anything?

It should: Drew Rosenhaus and the Florida Panthers have pulled off an ingenious bit of viral marketing today.

Yormark and Rosenhaus going toe-to-toe? I'd skip a Panthers-Hurricanes tilt for that one.

Can't wait to see the legs this grows. Kudos to the Cats for trying something very fresh and unorthodox. Ten days ago it was the "Big news ahead...hopefully in an hour" Tweet/FB announcement, and now this. Inspired.