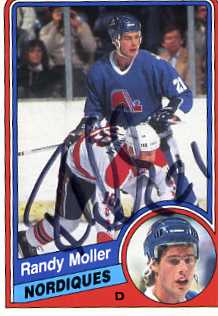 Cats' (now lone) radio voice Randy Moller was featured recently in a post by Cory Wolfe of the StarPhoenix, with yet more insight into his unique broadcast style mixed with a bit of his own history as a 13-year NHL player.

A humble warrior, "Red Deer" evidently choose not to overinflate his fight victories:

The SP: While playing with the Nordiques you were involved in one of the NHL’s last bench-clearing brawls.

Moller: The (Good Friday) Massacre in Montreal. I was in a number of them back in the day. The Montreal one was more intense than the Boston one. I got beat up in both of them. I was in 300 fights in my career and I won two.

Randy was not long after the conclusion of the Panthers' season given the dual responsibilities of play-by-play and color commentary in the radio booth, following the promotion of former partner Bill Lindsay to the television side of broadcasting (opened by the dismissal of longtime commentator Denis Potvin), to work with Steve Goldstein.

More items of interest for Moller fans, and of course a discussion on his ever-popular goal-calling technique, are highlighted.