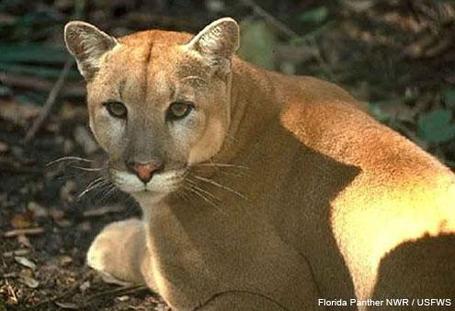 Not really hockey related, other than the namesake, but thought I'd pass along the news that a Florida panther (the feline...not Nick Tarnasky) was found shot and killed in Hendry County, near Big Cypress National Preserve, on April 21st.

If you happen to be the deluded clown who decided to pull the trigger, state and federal authorities may be knocking on your door, and hopefully soon.

Only about a hundred or so of the creatures are believed to exist, and it goes without saying that the hockey club was named after this cat, who also happens to be the "official state animal". That's right: not the marlin or dolphin, but the panther.

A reward of upwards of $15,000 has been offered so far in an attempt to apprehend the subhuman garbage misguided people responsible for this heinous act.

Self defense? Perhaps, but most folks involved in such a case - whether protecting their home or being stalked by an alligator - typically show up pretty quickly with a story backing their claim.

Tragic? No. An outrage.

Please see the left sidebar of this site to learn more about this beautiful cat, and the tireless efforts that have been made to protect it.