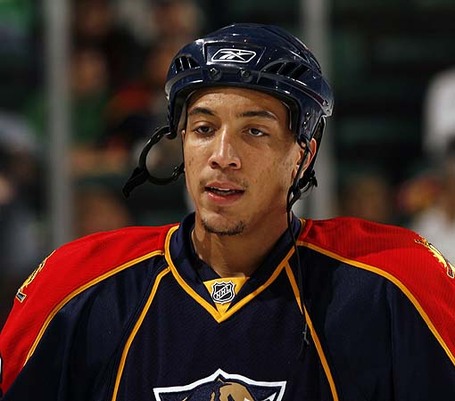 And so ends completely the frenetic roller-coaster ride which was Stewart's tumultuous seven-year "try out" with the Cats.

Few first-round (25th overall in 2003) talents have been given so many chances to make good on the initial scouting reports. New Thrashers GM Rick Dudley has seen fit to lend a hand to the big forward in a depth move - which says a lot about Atlanta's forwards. Dudley, coincidentally, was Florida's general manager when Stewart was picked.

Less than a year later, Mike Keenan had usurped him.

All that size, and an above average skill set, should have paved the way to a promising second-line NHL career. Alas, it was fourth or Rochester.

Eerily, Dudley also saw fit this afternoon to sign free agent defenseman Noah Welch, otherwise known as "What we got for Gary Roberts". No matter now...we'll get to see these two six times next season.

Personally, I'm half-tempted to believe Jacques Martin may have drugged Habs GM Bob Gainey into taking a run at Stewie. JM has been Stewart's biggest defender for three long years.

Can we expect Cory Murphy to be next?

What are your thoughts on Anthony Stewart and what went wrong with his development? The wrist injury four years ago? The personal issues? His Commitment? And was it time to call it quits?