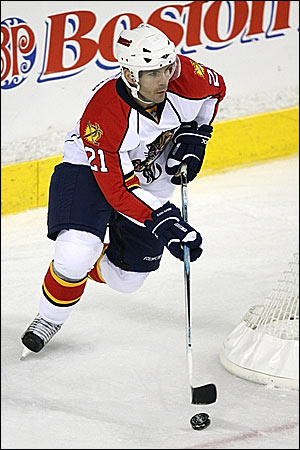 Still picking up the pieces after several days away, and this would now be considered "old news" (if "news" at all), but one of ex-Florida GM Jacques Martin's more heralded acquisitions will be toiling next season under Sweet Lou's umbrella on a two-way deal. $875,000 is a fine contract, as long as he is used in the correct situations. No I'm not a coach, but there was that Holiday Inn Express I checked into on the way home from Lantana...

Signed with much fanfare by the Cats in the spring of 2007, defenseman Cory Murphy was sold to the faithful as a power play specialist, and his stats after six seasons in Europe supported the claim.

Looking back to the start of the 2007-08 slate, and seeing him play his first game in the bigs against the Rangahs, he impressed with his movement and puck control (ironically, his first NHL goal was against the Devils two nights later).

Beyond that...not much. He was easily beaten, lacking speed and the requisite size to knock opponents off the puck. At a generous 5'-10", he wasn't much of a threat along the boards or in front of the twine. A power play specialist? Perhaps...but his five-on-five was atrocious. This was learned in very little time, and admitted by management with the Jassen Cullimore pickup soon thereafter.

Injuries hampered his remaining time with the Cats, though he remained one of those few guys that the fans "felt" for, as in, his heart is there; but the body wasn't up to it. A couple of waivers appearances in 2008-09 found him ultimately plucked by Tampa Bay, who declined to re-up.

All things considered, he's a guy who's worked his way to the finest league on Earth - the hard way - and is deserving of another shot in the National League. New bench boss Jacques Lemaire (so he won't be an advisor to the Panthers...?) could find some limited but fruitful role for him in a special-teams capacity. We'll know on Saturday, October 10th. Yeah. The home-opener. Better double-team him.

For the Devils' side of the equation, check out ILWT. Our very best to Cory.