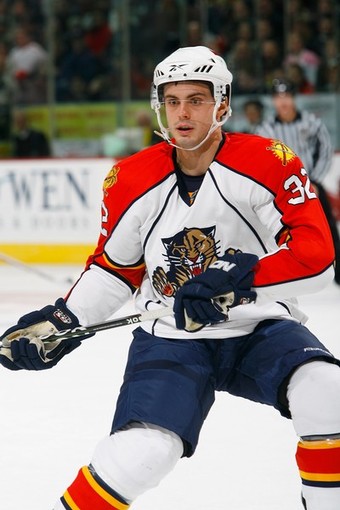 My first memory - and for the most part last memory - of Repik was on the first day of Florida's training camp in September, 2008. An open affair held at the pre-Death Star-style IncredibleICE expansion, the young forward bore down and scored easily on "Team A" goaltender Derek Plante with a truly ridiculous move in the model of a stickhandling extraordinaire along the lines of Pavel Bure. While perhaps an exagerration, the puckhandling prowess was breathtaking; like the guy on the beach in Jaws who was the only witness to the Alex Kintner attack, my initial response was a simple one: "Did you see that?"

After breaking from the junior ranks of the mightily successful Vancouver Giants (which has recently produced the likes of Evander Kane, Milan Lucic, and Gilbert Brule), Repik got his chance with the Rochester Americans in 2008-09, scoring 49 points (19 goals) in 75 games, in what could honestly only be summarized as a "sub-par" year for the Amerks as a whole.

An overhauling of the Rochester system at the time of his arrival left few stones unturned; the loss of Buffalo as one of two primary affiliates, as well as a completely new coaching staff, led by noted junior coach Benoit Groulx, added to the confusion for a storied franchise attempting to find its way. It was in this mess that Repik found himself looking for a career to establish in the bigs. The club eventually rebounded, with Repik as the points leader on a club ravaged by call-ups, though far off the pace in the hunt for a Calder Cup playoff spot.

In five games with the Cats in 2008-09, Repik had two goals and two penalty minutes. Granted, this was major-league miniscule minutes, as Panthers coach Pete DeBoer was doing a bit of scouting, but decent numbers based upon the - extraordinarily limited - ice time relegated to the youngling.

All things considered, Repik finds himself behind veterans Nathan Horton and Radek Dvorak at the right wing spot; can he crack the lineup?