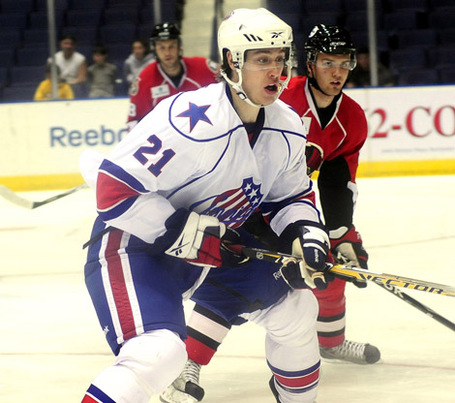 Cats' prospect Todd Bertuzzi Shawn Matthias, out on the ice and giving his all for Rochester last season.

SCOUTING SUMMARY FROM HOCKEY'S FUTURE (as of November of last year. Gulp.)

Hard to believe we're still waiting for Ken Holland's previously never-debated you-screwed-up-big nightmare to grow some claws and sneak out from under the bed to bite him on the kneecaps after dealing highly-touted Matthias to Florida for lowly-touted Berto and his impending UFA status at the deadline in 2007. Tick-tock-tick-tock...

A difficult season with the Amerks in 2008-09, his first as a pro, netted him 10 goals (20 points) in 61 games, Matthias somehow ended up spending sixteen matches with the parent club, notching two assists. They weren't on the same night, by the way. I don't personally recall those illustrious sixteen games, but if HockeyDB says so, it must be true.

There appears to be a bit of confusion as to Mr. Matthias' height and weight. HF has him pegged at 6'-4", 205 lbs, while Yahoo! is going the bizarre route with a 6'-3", 211 listing. Gaining weight and losing height. Swell. His masters in Sunrise, however, have him listed at 6'-2", 213. Whatever; at least he's categorized as a center all the way around.

And perhaps that will hurt him. Like it or not, the Cats have a dearth of centers. From Stephen Weiss to Steven Reinprecht to Steve Gregory Campbell and Kamil Kreps and Rusty Olesz and Jeff Taffe and so on. There's some serious time spent within the National League right there.

Does Matthias stand a chance to make the Panthers among this crowd? Doubtful, though not impossible. We've likely seen the extent of Kreps' abilities, and Olesz has been a "work in progress" since Day One. Taffe? He's hungry, after scoring big numbers in the AHL last year while watching his parent club grab the Stanley Cup. Campbell is a mainstay, so knocking him out is a fantasy at best.

A solid training camp can be a defining moment for a player, but as Anthony Stewart saw just under a year ago, that's not written in stone. Besides: coach Pete knows the system, which was not the case one year ago (direct inquiries to Atlanta's Anthony Stewart).

So what's the deal? Is this the Big Year for (longtime) A-lister Matthias?