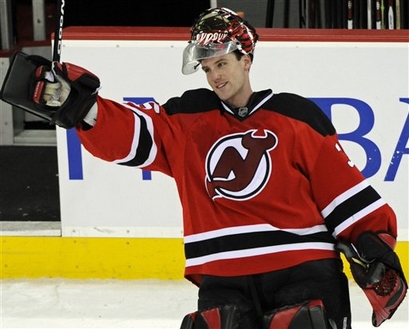 John from New Jersey Devils blog In Lou We Trust:
"With respect to his style of play, Clemmensen is not a goalie who is set in any one style; I believe he is a hybrid style of goaltender. In his tenure with the Devils last season, you could see him get better with each game.  He wasn't coming out of the net to play the puck nervously eventually, and looked more poised. That could be due to inexperience and the fact that he's filling in Martin Brodeur's crease. You should expect him to be more poised but at the same time wish he was better at moving about within the crease. hile there are times his movement and positioning are a bit off (and making the fan dig their head into their hands in concern), where Clemmensen just looks shaky in net. He's alright with either hand and his pads; it's when offenses keep him moving is where he gets into trouble. Especially laterally, but you can apply that criticism to a number of goalies in the league. The only other major question is whether Clemmensen was just playing out of his mind out of necessity last season or whether he truly is for real and just needed a real opportunity in the NHL to start some games.  From what I've seen, I like to believe it's the latter.  He's not going to push Vokoun or anything like that; but should something happen to him, I wouldn't panic."

John continues with some background on "Clemmer":

"Scott Clemmmensen is a success story. After leaving the Devils organization after being the back-up for Martin Brodeur or a starting goaltender with the AHL affiliate since 2000, he signed up in Toronto for the 2007-08 season.  He got shelled in the few games he played with the Maple Leafs and then was sent to the minors.  At age 31, he re-signed with the Devils understanding the situation that he could end up starting in Lowell.  And with Kevin Weekes already signed, he did just that. However, horror struck and Martin Brodeur would be injured for months.  Weekes was expected to step in, but Brent Sutter gave both goalies a chance, and Clemmensen won the job. Unlike Toronto, Clemmensen proved that he was up to the task.  He ended up playing 40 games with the Devils, putting together a 25-13-1 record with 2 shutouts, a 91.7% save percentage, a 2.31 goals against average before Brodeur returned, and the thanks of Devils fans across the board."