Interesting stat: of the thirteen Panthers handed fighting majors in 2008-09, seven are out of the organization, while one - Jassen Cullimore - awaits a phone call (ed. note: which I believe he'll get).

Only five of those had more than one "FM": Gregory Campbell and Anthony Stewart (6 each), The Dueling Nicks - Boynton and Tarnasky (5 apiece), and Keith Ballard (4). Stewy - he of limited minutes in 59 games - and The Beach have since ingloriously departed the organization.

Has the team "bulked up" for a rough-and-tumble style of play next year? Much more after the jump...

To lend some weight to the Fighting Major statistic, the following clubs - each of whom had what could be summed up as a slightly more successful year than Florida - posted these regular season numbers (with postseason result in parentheses): 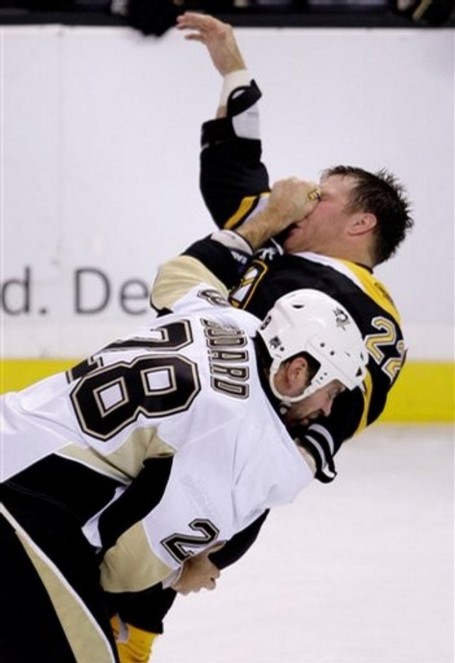 BEYOND THE TOP FOUR...

GREAT, BUT WHAT DOES IT ALL MEAN FOR FLORIDA?

The Panthers, as is well known, changed up their approach one year ago, dropping the stifling defense-first Jacques Martin-late-90s-strategy that was ultimately far more effective at rusting the turnstiles of the BankAtlantic Center than stopping shots in the building's defensive zones. New coach Peter DeBoer threw away everything that had defined the team in its recent past; speed, puck control, fast breaks, faster outlet passes, and above all individual responsibility were the hallmarks of his reconstituted Cats. It took the better part of the season for it all to come together, but when it did (barring a few late stinkers against Buffalo, St. Louis, and Columbus, not to mention a collapse of Biblical proportions by former defenseman Jay Bouwmeester following the trade deadline) the system flat worked.

Physical play? Part of the program, yes, but a true full-time "enforcer" was not considered a realistic option: waste of a roster spot for a truly skilled kid (which never really materialized) and all. Campbell, (two-way but nailed-to-the-bench) Wade Belak, and Boynton were the tough guys, though why "Soup" would be surrendered from his duties on a very dynamic line with Radek Dvorak and (now KHL-bound) Ville Peltonen to fly the battle flag confounded fans from day one. Then-GM JM obviously had a hand in this philosophy, though DeBoer wasted little time painting the club in his own colors (Belak's departure and Boynton's later team-induced suspension spoke volumes for the young coach; whether you agree with the moves or not, Coach Pete is In Charge, and now more than ever).

Can Florida survive the coming season in a league where the top clubs are far into double-digits in fighting majors? With the group that is currently assembled? Without a "nuclear-option" along the lines of a Darcy Hordichuk-type, chances are slim. As wonderful and supremely talented as guys like David Booth, Michael Frolik, and Stephen Weiss may be, they aren't power forwards who automatically place the fear of God into opponents when perusing the lineup card on gameday. Throw in a few new younglings such as Shawn Matthias and Michal Repik (Keaton Ellerby gets a pass on this one), and there is more fresh blood to protect than Cat fans can recall in a long while.

Probably Campbell, for better or worse. Not really his (Frank?) forte, but he can hold his own, in a less-than-middle-weight bout. He's evolved - through attrition - into a solid stand-his-ground-and-support-your-teammates player, but as a deterent? Forget it. Simply not his role.

The loss of Tanner Glass from Florida's minor league system probably had more of a resonance with fans than management had expected, but they run the club, and found the all-around nice-guy-with-a-killer-streak to be outside of their plans. Unfortunate, because a presence like his - with a bit more seasoning - could have translated to a Chris Neil-type for a long time to come.

Back to the present-day... Nathan Horton. 48 penalty minutes. Fans don't want him in the box, but considering last year's offensive stats, at least they'll know where to find him. Big stuff - and we do mean BIG stuff - expected for 2009-10...just not in the pugilistic category.

Nick Tarnasky - if can stick with the team past training camp - is most likely the best option as a small-time "enforcer", but again, his history and physical statistics don't promote terror in the opposition.

In the end, the Panthers head into the new season minus a clear-cut "policeman", which not too long ago was DOA in the "new" NHL. No longer.