Rangers' Prospal: was he ever in Panthers' crosshairs?

Share All sharing options for: Rangers' Prospal: was he ever in Panthers' crosshairs? 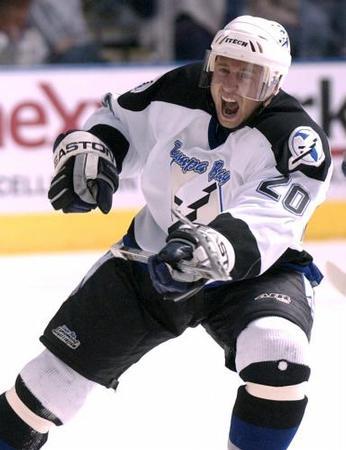 In case you missed it a few days ago, the New York Rangers signed recent Tampa Bay castoff Vinny Prospal - he of 19 goals (seven on the PP) and 45 points last season - for the less-than-princely sum of $1.1M (U.S.) for one single year of service. Maybe it was the -20 rating that dropped his value, or perhaps he took a discount to play for ex-coach John Tortorella. Have I mentioned the -20?

The left wing, who played 34 forgettable games for Florida in 2000-01, was bought out of the remaining three years of his ridiculous four-year, $14M contract with the Lightning, signed prior to the start of last season.

Now reunited with Torts - and hoping his pattern of following dismal years with good ones - he adds another offensive element to a Rangers club which is looking rather serious.

Moving on to the Panthers: could there have been room for the big winger in Sunrise? The dollars certainly make sense, but what of Florida's established(!) left side?

Realistically, that table only has seating for four. Taffe will battle Tarnasky for - most likely - that final spot. McArdle will require a training camp of truly heroic proportions to grab the position. Olesz, due to Martin-induced dollars, is guaranteed a slot based upon his salary alone. Stillman and Booth are - and just guessing here - secure in their roles.

What would the addition of a Prospal (at the coin the Rangers signed him) do to the Left Wing Depth Chart? The battle for the fourth slot is over. Taffe (minus a center opening), Tarnasky (ditto), and McArdle head to Rochester, without question. The Amerks are suddenly better in a number of offensive categories. Great if you're Benoit Groulx, not so great if your last name is DeBoer.

How does Coach Pete fit him in? Regardless, it's all hypothetical now, but could have been interesting to see if Vinny could have resurrected his career in Sunrise - at $1.1M per. This is a guy who could sleepwalk through the year and handily outscore Rusty Olesz.

A solid signing by Slats and the Rangahs.