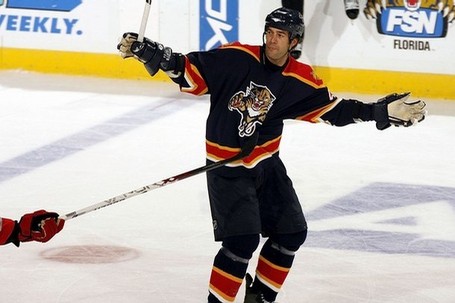 ...And the ghost of Deals Past hangs in for another go-round: evidently still not able to sleep a full eight following the Berto-for-Shawn Matthias trade with Florida at the 2007 deadline, Wings GM Kenny Holland dipped into one of the club's more questionable epochs, inking 34 year-old Bertuzzi to a one-season deal. Reportedly, he'll earn $1.5M for his scowl and ghoulish demeanor.

I'll not beat up on the guy who brought seven points in seven career games to the Panthers; it's been said time and again that he's misunderstood, he'd take back the Steve Moore affair if he could, does a lot for charity. Swell.

I do, however, find it hilarious that Detroit would travel this road...again. Team management is denying a "rebuild" following the defections of Marion Hossa, Mikael Samuelsson, and Jiri Hudler to points far outside the Motor City, but the re-acquisition of Berto is a confusing move for the perennial Campbell Conference powerhouse.

And to think Stevie Y probably signed off on it...

In my mind he simply doesn't come across as a Wing: almost universally considered controversy-free, Detroit's hockey team typifies professionalism. And Yzerman had more than a small role in the construction of that perception. 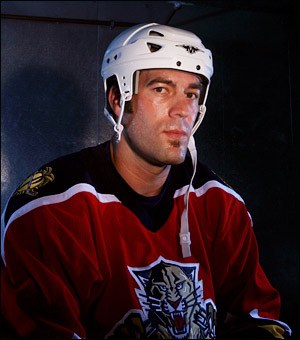 Turn that frown upside down!

Bertuzzi's been demonized for well over half a decade now, and regardless of the reasons for it, he still finds himself employed in the NHL. Some will call Holland a sympathetic master of personnel, keying in on a man who may hold the  promise of a resurgent career. Others will of course vilify him for giving a "bad boy" yet another opportunity.

Personally, I was clamoring for a re-signing in Calgary, making for a Jokinen-Bouwmeester-Bertuzzi triumvirate, playing Roberto Luongo's 'Nucks six times each year. In fact, recall Mike Keenan to the Flames' bench. Maybe take Noodles McLennan out of carbonite for the season. It's a 2006 reunion of the highest order.

Whatever. ESPN's gonna wish they had the league television contract when the Wings travel to Denver. That's reason enough to be interested in this otherwise under-the-radar free agent signing.

Related: Winging it in Motown, Matchsticks and Gasoline.