Share All sharing options for: BREAKING NEWS: Panthers are "nobodies" 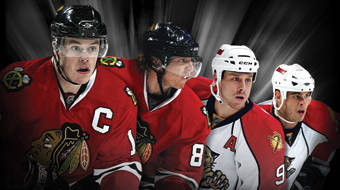 Even from Helsinki, the stands are more likely to be filled with Blackhawks jerseys than Panthers jerseys. Wherever they go, the Blackhawks are a name brand. The Florida Panthers are nobodies--even in Florida.

Now, read the article and keep the comment in context, but it's still a lousy, eyeball-catching tactic to lump the Cats' fanbase - no longer stagnant, and finally picking up steam - into such a broad stereotype.


If I recall correctly, the Hawks were having some attendance issues of their own in recent years. Like those years they failed to make the postseason. Sounds familiar to those of us who closely follow the "nobodies" at BankAtlantic Center.

Yes, Chicago's NHL entry will always be an "original six" member, and the club has generations of home-grown fans to rely on, as well as the simple fact that the name "Chicago" has a bit more far-reaching out-of-market penetration than "Sunrise" or "Florida". Yes, the Cats have nowhere near the name-recognition of their upcoming European opponent.

Sorry, select few Blackhawk fans, that the Panthers are not the Wings, Blues, Leafs, Rangers, Penguins, et al. Sorry we're not worthy of your presence on the world stage. It's enough to fight the entire sporting universe as a league in unison; evidently the Hawks are above even that battle.

I'm personally thrilled that the Hawks have gained serious momentum - for a wide-ranging variety of reasons - over the past several years. A healthy "big market" team gives the "smaller" guys hope.

I'm getting a visual of the Chicago front office staff, gathered around the conference call with the league where the 2009 "Premiere" teams were announced. "And to Helsinki: the Blackhawks..." (breaths held in anticipation of a big-ticket matchup) "...and Panthers." Blank stares.

Wouldn't have wanted to be around that crowd for a few hours.

Of course, it didn't go down that way, and the teams were not a closely guarded secret by any means, and I'm being phenomenally simplistic. Sort of like calling the entire Florida organization "nobodies".