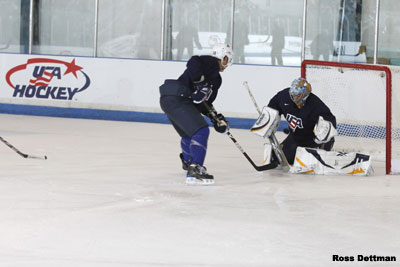 Kind of a ghoulish and definitely selfish question to ask - especially as a proud tax-payin', flag-wavin' Yank - but here goes:

As a fan of the club - and presumably your country in the Olympic Games - do you wish to see Panthers leading goal-scorer Booth at the Vancouver games in February?

A sure-fire lock for the (let's-include-every-team) NHL All Star game that would have taken place if not in an Olympic year, Booth is in the running for a roster spot with Team USA. A wonderful, and richly deserved, honor for any athlete, the Panthers' forward still has yet - as do all the candidates - to officially make the squad.

The participation of NHLers within Olympic hockey has been a hot-button topic for over a decade, and while some may argue that it's tremendous visibility for the league on an international stage, others take the stance that it's simply too easy for a club's star(s) to risk injury. Just ask Senators fans circa 2006 (see Hasek, Dominik).

So, what's your opinion gonna be: go for the gusty and represent the US of A, or remain home and rest up for the stretch run?

BTW: I don't think for a millisecond that he turns down the opportunity if presented.

(This is simply an opinion poll, ladies and gents. There is no right or wrong answer, and you won't be referred to as Benedict Arnold...be selfish!)