From the Den: Florida Panthers and Blackstone remain Cutting Edge

Share All sharing options for: From the Den: Florida Panthers and Blackstone remain Cutting Edge 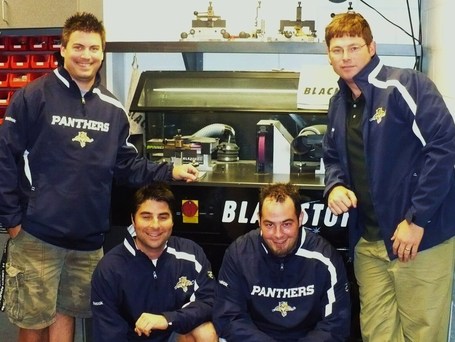 For the casual hockey fan, very little thought is typically given to their favorite player's equipment beyond the flashy colors of the uniform itself, perhaps the name on the stick, maybe the helmet and gloves. The skates? Until a certain #8 from Washington began wearing an unorthodox color of laces, probably not much attention was garnered down there.

Folks in the know, however, realize there is far more taking place below the ubiquitous black boots than most observers may ever realize. Like correctly fitted tires on a sports car, the business of what goes on underfoot is vital to the performance of the mass (be it vehicular or human) that rides above.

Though the fit of the skate is indeed vital, the cut of the blade (similar in concept to the varied tread patterns of tires) ultimately dictates just how much "flow" and "bite" - industry buzzwords for speed and grip - are allowed to prevail for the user. Forever a tradeoff between the two, the technology did not exist allowing for accurate tuning of the opposed disciplines. A skater had too much of one and not enough of the other, with no way to "dial in" his or her preferences to the degree necessary for the preferred level of agility. Until very recently. And it's a bit of a local tale.

Enter the Flat Bottom V, a skate-sharpening system created by Blackstone Sports of Ontario. Makers of standard sharpeners and accessories for over eleven years, Blackstone co-founder Steve Wilson and his design team created a revolutionary new process for sharpening a skate, allowing for previously unheard-of speed and grip. 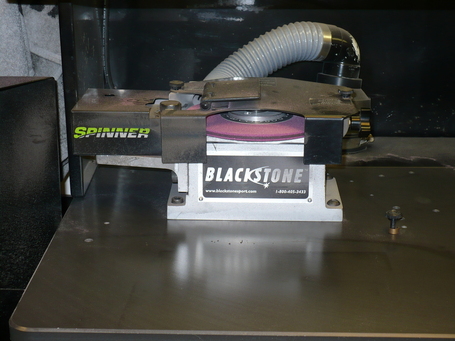 As opposed to sharpeners of the past, which were (and remain) only capable of carving a groove with a diamond in the blade in an arch pattern (limiting the tailoring necessary for personal optimization), the Flat Bottom V operates on a different philosophy: the creation of a "spinner", which employs several diamonds, allows for a customized shape similar to a square. Depth of the cut and size of the "hollowed" square provide for multiple options for the end user. In essence, a perfectly balanced blade.

More than two years of in-house development and subsequent testing by the University of Ottawa proved the usefulness and practicality of the technology, but it had never been tried on an NHL player. Until August of 2008, and this is where Sunrise, Florida plays a role.

Blackstone's Wilson, on an annual visit to meet with Panthers' equipment manager Chris Scoppetto and his staff, introduced his longtime customer to the company's newest toy: the Flat Bottom V. Impressed, but not yet sold, Scoppetto asked newly-signed winger Cory Stillman to be a test-bed of sorts, trying out the machine and getting the real-world opinion of a veteran NHLer.

"Stiller": Founding Father of the FBV?

Described by assistant equipment manager Chris Moody as "blown away" and smiling from ear to ear after the initial tryout on BankAtlantic Center ice, Stillman immediately fell in love, demanded Wilson leave the machine (his only demo unit), and promptly crowed from the mountaintops (or I-95 overpass, whatever) about the validity of the technology and how his skating had evolved - in one trial - to a level he could hardly have imagined. By the season finale in April, up to fifteen Panthers had moved on to the Flat Bottom V and vowed never to return to the old school single-diamond standard.

Marketed simply by word-of-mouth and in limited but steadily increasing operation around the National League while gaining in popularity among retail outlets throughout Canada, the Flat Bottom V is quickly becoming the skate sharpening method, and your Florida Panthers play a more-than-significant role. The next time Cory Stillman - and most likely now any of the Cats - pulls you out of your seat with a phenomenal deke (or fake, or burst of speed), thank your local equipment manager. Far more to it than just a flashy sweater.

For more info on the Blackstone Sports line of skate sharpening machines and accessories, check out their website here. My sincere thanks to Steve Wilson and Grant Marek for the invite, and the Panthers' equipment staff (Chris Scoppetto, Chris Moody, and Jason MacDonald) for answering questions, allowing for a few photos, and most importantly hosting my visit at the BankAtlantic Center last week. All true professionals. And my apologies to Steve for the early typo!