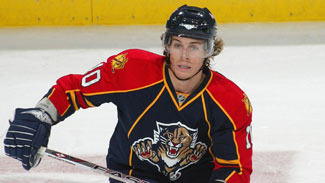 There's not a single member of PanthersNation (ugh, I know) who will overestimate the value of winger David Booth to the Florida organization. Bringing a sweet scoring touch, a work ethic second to none, and a winning smile have been a breath of serious fresh air to fans of the Cats, all too used to the talented yet dour likes of year after vanilla year of Olli Jokinen, Jacques Martin, and Jay Bouwmeester. Of course, everyone appreciates the solemn reverence of stoic bromides such as "We've got to play sixty minutes" and all, but a character such as Booth can - and has - reinvigorated the base in a way nothing less than a fresh-faced, all-American, boy-next-door could.

Short of carrying his club to the postseason, anyway. But enough silly talk.

He's done some good work on the ice as well by the way, now going into his third full season donning the Screaming Puma Concolor Coryi, scooping up 100 points in his past 145 games. Tight.

A recent article at NHL.com by Mike Morreale listed the "ten best" (active) U.S.-born players, and after the SuperLink of Madness, we'll take a look at why Michigan-product Booth is not among them...

The list - combining forward, defense, and goaltending positions - is highly speculative and does not appear to be based upon any inherent "system", i.e. point totals, time-on-ice, power play assists, and so forth. Simply a group of names which have gained traction recently. Nothing is wrong with this, of course, but perhaps a ten-best forwards, ten-best goalies, etc. would be a more objective way to fairly evaluate and place what is honestly a very decent bunch of players.

We hockey fans are like the rest of western civilization, post-MTV: we love our lists. Here's what Morreale has produced, as far as American-born forwards are concerned, and their stats from 2008-09 (cuz, again, I'm not certain what the criteria for judgement happens to be)...

Those ten games lost to injury most probably would have resulted in a conservatively-speaking additional four points, which may or may not have turned the tide for him. Head-to-head with LA's Brown, this certainly should have been the case. Yes, Brown is a highly-touted first-rounder, but is he pound-for-pound "better" than Booth? Time will tell, and enjoy the obligatory highlight video...