The gloriously independent HockeyReference.com plows on

Share All sharing options for: The gloriously independent HockeyReference.com plows on 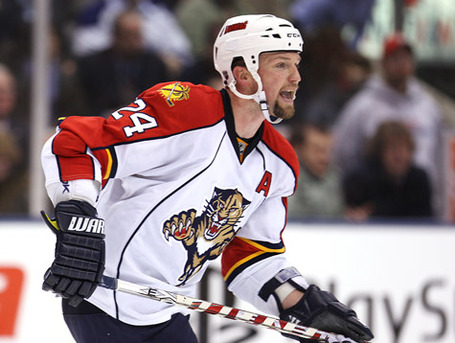 Cats D-man Bryan McCabe responds to his placement in the current HR sponsorship pricing structure: "Ten bucks? I make that while sneezing during an icing call..."

Been quite a while since The Box last visited the phenomenal HockeyReference.com...so long that a number of the highly-original first round of sponsorships have since expired.

If you hadn't been involved in the initial buzz, HockeyReference appears as - in diluted form - simply another stats database, similar in most every respect to the long-time first-responder on the puck-researcher's "favorites" list: HockeyDB, at least on the surface. Junior-, minor-, and major-league statistics rule the day, most of which can be found in a dozen or more highly reliable locations. Need a stat? They've got it.

Here's where the similarities end: HR allows sponsorship of individual pages, be they team, players, or coaches...for an entire twelve-month period (pending editorial approval of the submission). Yes, the dream is alive: YOU can be the sole proprietor of Nick Tarnasky for One. Full. Year.

So much to see, so many names... Not to fear, however: The Box has been lapping the HR neighborhood in a hot car which doesn't belong to us, seeking out some of the more notorious remarkable characters - as well as a few guys familiar to you and I in PantherLand; follow the All-Your-Base-Are-Belong-to-Me jump-off link below...

As stated, HockeyReference is not collectively any different than other statistics-based outlets; they all perform a fine, well-researched service for anyone scouring the interwebs, brooding over long-forgotten WHA numbers from a by-gone era. It works, and works well.

The concept of calling a player/coach/team your own for a year? That's a new one. Hockey fans the world over found the idea, at the very least, intriguing, forcing untold numbers of wallets out of back-pockets, all for the greater glory of "owning" an NHL player for the equivelent of a couple of cups of cheap java.

Of course, costs are commensurate with a player's marketability; the head coach of the Phoenix Coyotes ranks a tad higher on the dollar-meter than the likes of this dood. Supply and demand, as they say.

Beside the ruthless self-promotion which became a hallmark of such an endeavor, a number of creative strategies were employed in the dog-eat-dog sponsorship game: favorite-player love, arch-enemy hatred (any takers in, oh, Detroit?), and good-natured ribbing (for, well, her pleasure).

Some of the obvious favorites and their "expiration" dates:

How do the Panthers fare? Check 'em out (use the search feature at HR for details):