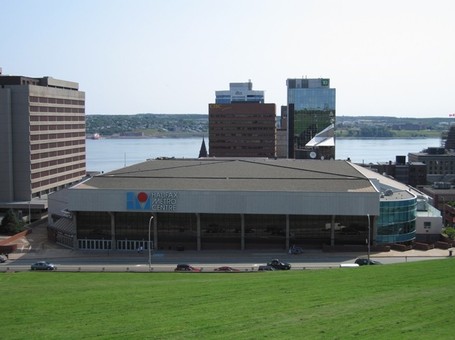 We're going to ease into a new year of live blogging by going no-frills, at least at this early stage. Seeing as these first few exhibition "games" are in essence a series of sea-trials for rookies and camp invites, we'll keep it light and breezy, since most of us are simply ready for a hockey fix. No one is expecting 25 minutes out of Jay Bouwmeester David Booth tonight.

At the other end, Dany Heatley is always a force...er, Jonathan Cheechoo...um, not playing, eh? Hmm. Did you see the picture of the Halifax Metro above? Shiny!

Florida's Pete DeBoer, however, is taking a more aggressive stance with his lineup. The official site has the following names among this evening's squad: Booth, Weiss, Horton, Kreps, Ballard, Tarnasky, Matthias, Ellerby, Kulikov, Garrison, McArdle, Backman, Clemmensen, and Salak. Dennis Seidenberg is enroute to meet up with the club, but according to DeBoer will likely not see action before the Montreal game. Steve Gorten reports Martin Skoula is now with the team, but will not play.

For the record, audio may be found at Ottawa's Team1200 (pregame show at 4pm, puck drop at 6). We also recommend a stroll over to Silver Seven, SBNation's excellent Senators page.

As always, thanks for coming by and checking us out.