LIVE BLOG: Panthers at Senators (real ones this time)

Share All sharing options for: LIVE BLOG: Panthers at Senators (real ones this time) 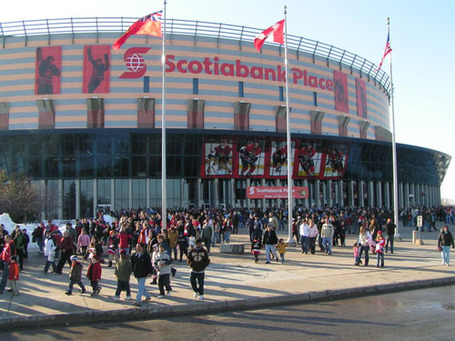 Along with the teams we listened to last evening, we were all getting used to having hockey back - for real - albeit in radio form. Personally, it was strange hosting a live blog for the first time since early April. Tonight will be that much easier, though the hoped-for live-streaming of the game looks like a fantasy.

Our friends at Ottawa's TEAM1200 will once again be providing their usual excellence, to our benefit. Silver Seven has a quick rundown on the home squad's lines; if you frighten easily look away.

The Panthers counter with another balanced roster, similar in essence to yesterday, but introducing the likes of Cory Stillman, Rusty Olesz, Tomas Vokoun, Steve Reinprecht, and a host of others making their preseason debuts.

Amerks' fans - and perhaps a few Everblades fans as well - will undoubtedly have a high level of interest in this one: Graham Mink, Jeff Taffe, Jamie Johnson, Andrew Sweetland, AJ Jenks, Mike Duco, Clay Wilson, Dmitry Kulikov, and Tyler Plante will all be in the lineup.

I'll be on and off while participating in my first live fantasy draft in a very long time, but that'll be later. Anyhoo, enjoy the game and thanks for pulling up a chair. Go Cats.

Will Florida make any player reassignments following this game?