Canadiens' Jacques Martin : A legacy of confusion in Sunrise

Share All sharing options for: Canadiens' Jacques Martin : A legacy of confusion in Sunrise

New Hab Scott Gomez asked a teammate what he later deemed "the dumbest question": would tonight's exhibition opener against the Florida Panthers be a sellout? Like so many games before, and countless more to follow, the answer was an explicit "yes".

Montreal fans are eager to get a first view of their revamped Canadiens after what can only be deemed a less-than-stellar 100th anniversary season. Excitement over free agent pickups such as Gomez, Mike Cammalleri, and Brian Gionta have the locals believing in substance and systems over last year's bloated pomp and circumstance. Oh, and they're probably curious about that new guy behind the bench.

Florida followers undoubtedly will have an eye on Habs head coach Jacques Martin: not quite as polarizing a figure during his days in Sunrise as, say, Mike Keenan, but the fanbase was unquestionably split on how best to remember the Cats' three-year coach and two-season GM (who has yet to be officially replaced in that capacity). What exactly did he do for the Florida Panthers? 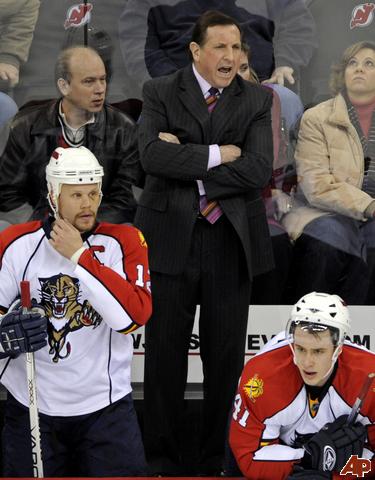 Is "JM the Bench Boss" to be hailed as one who brought consistency - albeit of an underwhelming variety - to the Panthers' record (three seasons: 110-100-36, no playoffs)? A coach who continued the development of Olli Jokinen and authored the (lamely titled) Sunrise Express...together again after all these years?

Or a dinosaur who couldn't adjust to the post-lockout offensive-minded world of the modern NHL? For a man who was believed very close to his boss (Keenan), they didn't appear to be doing anything more than spinning wheels and offering kneejerk reactions (Kristian Huselius for Steve Montador and Dustin Johner in late '05).

Best described as defensively conservative - and that's probably polite - Martin's strategies strangled the abilities of their forwards while rarely allowing blueliners to make that all-important breakout of their own zone. A bizarre combination of pass-pass-pass-pass-pass. The mid-90s New Jersey Devils - never a club confused with exciting hockey - shut down neutral ice while the defense scooped up turnover after turnover, immediately sending it forward. Until it was legislated out of the game in 2005, this was almost unbeatable. But Martin continued attempting to employ it...and didn't even have the right personnel to make it work even if it remained legal.

Another issue: his allowing for the roster to "split" or develop cliques. Widely commented on by Florida players after DeBoer's hiring, the team had fractured into mini-fiefdoms; seldom were relationships any deeper than one or two fellow players. Any form of unity had long since disappeared, and Martin's hands-off approach - basically leaving Jokinen, a captain whose leadership skills have been questioned for years by fans, in charge -  led the organization headfirst into "Country Club" territory. 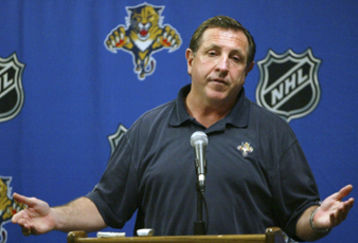 Is "JM the GM" a visionary who had the foresight to outbid a desperate Ottawa organization for the services of a yet unproven (at the big-league level) Peter DeBoer - as his own replacement, no less? (It could be conspiratorially theorized this was a shocktroop move to keep the young buck out of the hands of his former employer at Scotiabank Place, but we're not going there.) Or is he to be chastised for holding on to a determined Jay Bouwmeester for far too long?

Ask just about any Panthers fan what Martin's greatest accomplishment was - in all his time with the club - and chances are very good you'd get "Pete DeBoer" as the answer. Second? Quite probably the Jokinen for (essentially) Keith Ballard deal at the 2008 Entry Draft. Beyond that? Perhaps signing Stephen Weiss, Nathan Horton, and Ballard long-term.

Notice a pattern? They're all management actions. The list goes on: assistant coach Mike Kitchen, a JM hire, remains with the club. The scouting staff was left more or less in place, still under the tutelage of a very capable Scott Luce; Martin could have gutted them long ago, but stayed the course...it was this bunch who drafted - under JM - a few pretty hot prospects: Jacob Markstrom, Keaton Ellerby, Michal Repik, Evgeny Dadonov, and others now in camp. A solidified - though not initially successful - primary operating agreement was secured with the Rochester Americans. Tomas Vokoun was acquired, as were Radek Dvorak and Cory Stillman.

Not all of his moves were brilliant, of course (Chad Kilger, anyone?), but perfection isn't realistic. If there's one tremendous debacle he alone perpetuated it would have to be not trading Bouwmeester one year earlier - before the extension was signed - when it was painfully obvious the defenseman wanted out. Left to clean up the mess after JM's departure in June, assistant general manager Randy Sexton could harness only the rights of soon-to-be UFA Jordan Leopold (eventually signed) and a third-round pick from Calgary. What more could be done? (For the record, I supported Martin NOT trading Bouwmeester at the 2009 deadline.) Ah, hindsight.

Nonetheless, for a guy with zippo management experience above the bench, it wasn't a terribly embarrassing run.

He's been given his dream assignment: head coach of the Montreal Canadiens. Regardless of the multitude of opinions surrounding his time in Sunrise, we should all hope for such luck.