Share All sharing options for: LIVE BLOG: Panthers at Canadiens 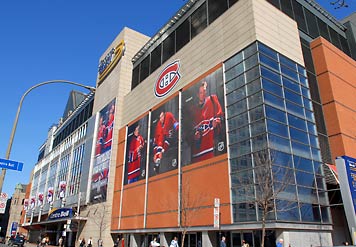 The exhibition train thunders on, stopping this evening at Montreal's Bell Centre (or Centre Bell for you locals).

The Habs are taking this, their first preseason game, rather seriously, pushing a collection of the biggest names on the roster. Not that their coach sees this as anything but a normal night at the rink. We've already covered the Martin angle earlier in the day, so let it lie, we shall...but the opportunity to see JM face former understudy Pete DeBoer is a plotline we can all applaud.

As for the Cats, GR at On Frozen Pond has this from camp: "The Panthers made their first cuts, sending Adam Comrie, AJ Jenks and Garrett Wilson back to their junior teams." Steve X from the Sun-Sentinel went a bit further with a quote from assistant general manager Randy Sexton, alluding to the club's judgement that the three "all made progress". Wooot.

Bryan Allen on the loss of Jay Bouwmeester: "not really a thought for our team anymore." Thank God in Heaven.

The 71% of you from last night who predicted roster cuts following the Sens game? I owe you a Coke.

Radio feed is provided by CJAD, while no television outlet has yet been publicized - if there is to be one at all.

As always, say hi to our buds (er, probably shouldn't refer to Montrealers as "Buds") over at Eyes on the Prize, while a visit to Four Habs Fans is forever good for a laugh.

Welcome once again, all. Go Cats.