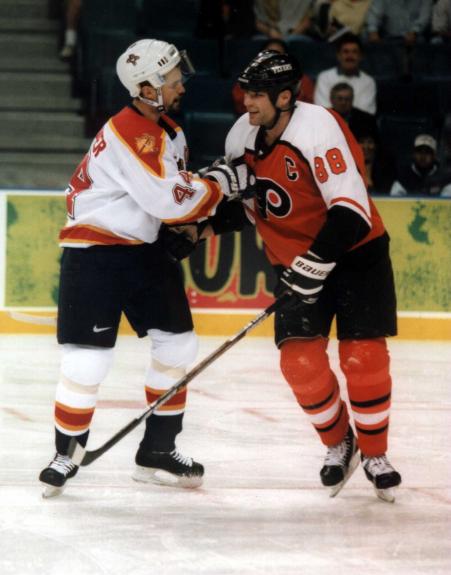 Robbie (left) in his salad days with Florida, squaring off with some large Philadelphia player.

This is a bit startling; hard to believe a hard-charging, Cup-winning, checking-line center is unable to find employment within the NHL. Granted he's not the player he once was projected to be, as his -17 last year would indicate, but he can't be completely over the hill at thirty-four with 21 points (14g) on a Ducks team hardly considered elite in 2008-09.

Sources say Niedermayer has received some interest from NHL teams, but none of the offers have been considered financially worthy.

If the "K" is willing to pay him whatever is worth uprooting your family from California, by all means take it.

Florida's first-ever pick (1993) and an Original Panther, Niedermayer will forever be connected to the area for his eight years of service with the organization. Yes, that includes the Rat year.