ESPN's Buccigross should run for mayor of Sunrise...

Share All sharing options for: ESPN's Buccigross should run for mayor of Sunrise... 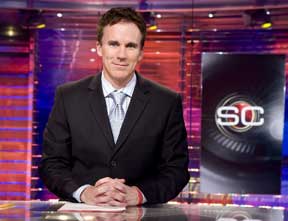 ...because he's the only one of a Group of Four  WWL columnists who voted not to dissembowel South Florida of its hockey team. We're waiting on local results from this esteemed pollster, due any moment...

Granted, he decided against contracting any clubs from their current locations - in fact he added franchises - but it was refreshing someone took a stand in defense of us non-hockey-deserving fans in locales such as Atlanta, Phoenix, Raleigh, etc. Kissing up to existing fanbases? Perhaps, but that's never been Bucci's style.

Feelings were a bit different among his colleagues, however.

In fact, Florida was the only club consistently targeted for the toilet among the likes of Scott Burnside, Pierre LeBrun, and Barry Melrose. Attend:

"Hey Pete DeBoer, ever been to Seattle?"

Cheeky. And BTW, he is pro-European NHL division. Goodbye Sunrise, Hello Cologne! No question our German friends will pack in over 8,000 for a weeknight preseason game after nine years outside the playoff picture.

Another approach is the bad-ownership angle:

Florida Panthers? Out. Sorry. Bad place for an arena. No one cares. But the main reason they're out is we recall being at a board of governors meeting in Dallas at the 2007 All-Star Game and listening to team president and COO Michael Yormark telling a small group of writers the Panthers' problems were really the fault of negative reporting from the Canadian hockey media. He was serious.

Bad place for an arena? How exactly? Phenomenal highway access while situated 10 minutes west of Fort Lauderdale, 45 minutes southeast of West Palm Beach, and 20 minutes northwest of Miami is pretty darned accessible, unless of course you require a market to defile for an article. Then it's a "bad place". Or perhaps we're treading into "Newark and Wallets" territory? Oh snap...wrong guy.

And no one cares. Don't forget that, oh valued readers of this site: my appreciation to each and every one of you for stopping by with no clear purpose or interest in mind (I guess we really can sell anything on the internet...).

The Yormark comment can be taken from half a dozen different contexts, so throwing theoretical halon over that fire just isn't going to smother it. I'm reading it as such: the prez was firing back at a perceived bias among the Canadian media with regard to Sunbelt expansion teams. If so he's got a point; what Panthers fan doesn't go all fetal whenever the Cats are mentioned in Toronto newsies? It's only ever one of two subjects: Bryan McCabe, or South Florida doesn't deserve a franchise (not necessarily in that order). This script is ancient.

Mr. Newark himself declined any further rational clarification than the following, but we feel it speaks for itself:

Next, move the Florida Panthers to Portland, Ore(.)

Well reasoned, concise, and iron-clad logic at work here. Who can argue it? Sixteen games was it last year?

So the Hate Express rolls along as we completely expect it to do. Is anyone surprised?