Big news out of Helsinki early this afternoon as the Cats' first round pick (14th overall) in June finally inked an entry-level deal with Florida. According to assistant general manager Randy Sexton, negotiations began to pick up "about three weeks ago".

Leaving the boring stuff legalese out, Florida had until 5pm today in which to sign the soon-to-be 19 year-old defenseman or he would be obligated to return to his junior team in Drummondville. A previous deal with the KHL was also dismissed.

On Frozen Pond's GR has a nice video clip featuring Sexton discussing the process, while the Sun-Sentinel's Steve Gorten feels today's announcement is one more call-to-arms for the Panthers to hire Sexton as full-time GM. He really is quietly cementing his place in the club's hierarchy, without destroying the current core. 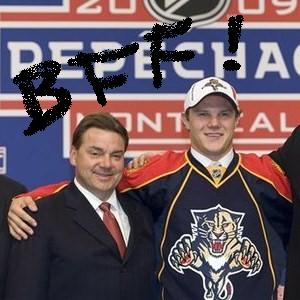