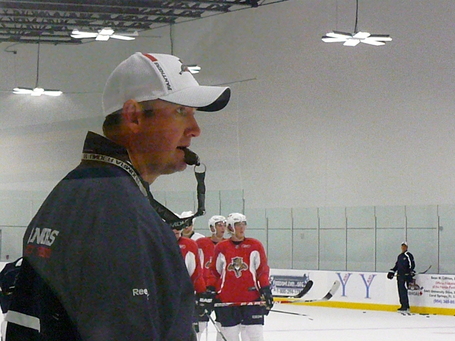 Pete's back...with an edge (and a reflection).

A great Labor Day morning at IncredibleICE in Coral Springs featuring your (future) Cats. Thoroughly enjoyed seeing all the familiar faces, and can't thank the organization enough for opening up the brand spankin' new ice sheet to the fans.

A few quick thoughts: Evgeny Dadonov appeared in game-ready condition; he's a smaller guy, but quick and possessing a nice wrister. Dmitry Kulikov is similar in size, with a Keith Ballard-ish stature and a hint of what may be toughness. Certainly was not out of place among his brethren. A number of participants seemed to be a half-step behind the drills, but I had to continually remind myself that this is Day One; midseason form we ain't gonna get. Michal Repik remains the speedster he was at last year's camp. The current Amerks unquestionably were comfortable with each other, having a year (or more) behind them on the same bench. Shawn Matthias and James DeLory bearing down on the offensive zone will give goaltenders heart attacks: they are absolutely gigantic around the net. Ditto for Keaton Ellerby, Adam Comrie, and Colby Robak. These are big doods. Alexander Salak looked slick in an evil black-only mask, but seemed a bit out of place, and I can't put my finger on why. Tyler Plante - still a hulking 6-3 before skates - put up the superior fight.

As for the venue, this event was held on the new Panthers-only ice sheet at the facility, and by new, I mean NEW: the boards are pristine white, as are the walls and ceiling. Several large glassed observation areas are employed for patrons, while the overhead lighting is crisp and remarkably, well, white. Behind the benches is a doorway to the - again - new training and workout areas. All the way around, a beautiful rink.

I'm currently uploading all of the photos, so stay tuned; they'll be up within a few hours.

And how about this for a Labor Day feast, Panthers-style: 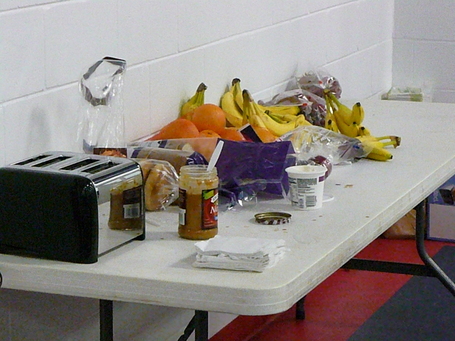