Share All sharing options for: Future of Florida Panthers' blueline solid with ascent of Colby Robak 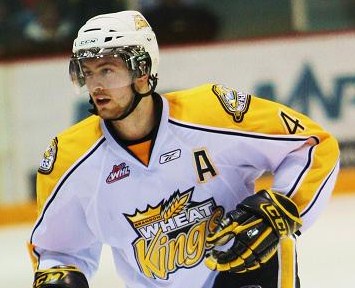 The 2008 Entry Draft remains a focal point for many Florida Panthers fans; lacking a pick in the first round, Florida's scouting staff made the most of what could have been a tough day by jumping at prized Swedish goaltender Jacob Markstrom with the 31st selection. We're all aware of his increasing name recognition and potential, but perhaps overlooked has been the Cats' follow-up pick from the same round.

Defenseman Colby Robak - currently in his fourth season with the WHL's Brandon Wheat Kings - has dramatically increased his point totals in each successive campaign. With a goal and assist Saturday against Edmonton, the 6'-3" 207-lb blueliner boasts an impressive 9g-36a-45p resume. Proficiency at both ends of the ice is evidenced by a +33 rating, and he's already surpassed last year's numbers in the regular season.

Playing within a roster which includes such high-profile picks as forwards Brayden Schenn and Scott Glennie, the Wheat Kings occupy (at press time) the third spot in the WHL's Eastern Conference. But the defense is all about assistant captain Robak. 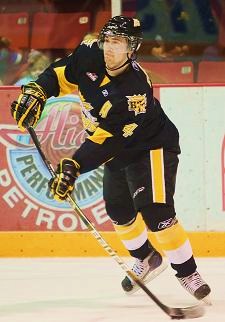 He's currently ranked by Hockey's Future as the fifth-best defensive prospect in the Florida organization: a list which includes the names of Dmitry Kulikov, Keaton Ellerby, Jason Garrison, and Michael Caruso above him. That's solid company, especially considering Robak is still in Juniors.

A native of Gilbert Plains, Manitoba (population: 750 and hometown to one of my early heroes), Colby was kind enough to spend a few minutes with The Box last week.

Whale4ever:  How did you settle on defense as your chosen position?

Colby Robak:  Growing up I was always a little bigger than the other guys; my parents and coaches said "Let's throw you back on defense and see how far it goes". And so far, so good.

CR:  No significance. As a 16-year old it was like whatever numbers were left was what you got. Number 4 was left and Kelly [McCrimmon, Brandon head coach] gave it to me; it's stuck ever since.

W4E:  Do you have a backup number, in case Dennis Seidenberg signs a ten-year extension with Florida?

CR:  No backup number; I'll take what they give me.

W4E:  Regarding the Panthers' rookie camp in September: any good stories come from it or all business? Hit the ice in the morning and right back to the hotel?

CR:  It was a really good time; I mean, meeting all the young guys like [Keaton] Ellerby and [Kenndal] McArdle and all those guys. It was a lot of fun. You'd get up in the morning and go to the rink and hang out with [with them], and the training staff, and the whole organization. It was fun.

W4E: Get a chance to spend time with some of the veterans?

W4E:  Do you keep in touch with any of your fellow Florida prospects?

W4E: You mentioned Jenks; spoken to him since wrapping up the World Junior Championship?

CR:  I texted him not long after; it's a huge tournament and it's worldwide. I'll give him a few weeks to let it all settle down a bit.

W4E:  Finishing up on rookie camp, what were your thoughts on IncredibleICE, the Panthers' newly-renovated practice complex? You folks were quite probably the first to use the new addition in an official capacity.

CR:  It's unbelievable. I mean, the workout facility, the ice surface. It's hard to explain it. Everything you need is right there. Something to be proud of, absolutely.

W4E: (Obvious Question Time) Turning to the day you were drafted, what was your fondest memory of the event?

CR:  I'd have to say getting your name called. I mean, it's every kid's dream to have your named called by an NHL team. That would definitely be my favorite memory.

CR: It's in my parent's basement at home along with my other jerseys. So it's serving its purpose down there.

W4E:  Seen any Panthers games on TV or otherwise this year?

CR:  Well, with them be so far down in the states it's pretty hard to get there. Whenever they're in Toronto or Calgary, I've caught a few of those games.

W4E:  What was your favorite team while growing up?

CR:  Colorado Avalanche. I was a big Joe Sakic fan and Ray Bourque when he was there.

W4E:  Who was the player you most admired?

CR:  I'd have to say it was Nicklas Lidstrom; definitely another guy I looked up to quite a bit, being a defenseman. He could move the puck, his skating's amazing.

W4E:  Name a few players who've been particularly helpful to your career in the WHL.

CR:  When I was younger, Dustin Kohn, who was drafted by the Islanders, really helped me out. Every year there's a new player; last year it was my defensive partner Keith Aulie, he really helped me grow as a player. This year, we just picked up Travis Hamonic, another Islanders guy who played for Team Canada. It's been a lot of good guys.

W4E:  Any recollection of playing against Ellerby or Michal Repik when both were in the Western League?

CR:  Yeah, I actually remember playing against both, when Repik was in Vancouver and Keaton was with Moose Jaw. With Ellerby what I remember was when he was on the ice his skating; he was a great skater and that's stuck with him.

W4E:  What's your greatest strength as a player?

CR:  I'd have to say it's my skating. That's something I've worked on quite a bit. Probably my biggest asset is leg strength...I use my legs to check people rather than my stick, so that's been helpful.

W4E:  What would you target for improvement?

CR:  Being a little more physical. Being one of the bigger guys on the ice I don't think I use my size enough to my advantage. It's something I've been working on.

W4E:  Ideally, where do you see yourself next season?

CR:  Just like everyone else: in a Florida Panthers jersey.

W4E:  Who outside of hockey has been your biggest inspiration?

CR:  My parents. They gave up so much to let me continue what I'm doing for my career, so definitely my parents.

W4E:  You're currently playing which videogame?

CR:  Right now it's the new Call of Duty: Modern Warfare 2. Very addicted to it. Our whole team plays it.

Keep an eye on Robak as the season progresses at the Wheat Kings' official site. And undoubtedly, next fall's training camp will have a buzz around this superb player on the rise.

My special thanks to Colby, Brandon's Matt McNish, and The Copper & Blue's Derek Zona.