Florida Panthers and the Shootout: A Blogger's Rant

Share All sharing options for: Florida Panthers and the Shootout: A Blogger's Rant 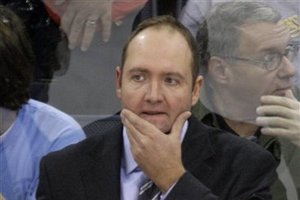 I'll get right to the point. As I was leaving the BAC last Wednesday I realized that I was much more upset then I usually am after a loss. Much as it sucks to say so, I've gotten pretty used to leaving our home arena after a loss in which the Cats squandered away a late-game lead, but this time it was different. Getting into the whole ‘3rd period collapse' is a completely different issue.

What had me steaming after the loss to the Caps is something that upsets me every time we've gone to a shootout at home.  For some reason, our coach thinks that it's to our advantage to shoot first when given the choice.  I realize that he isn't alone, that many coaches make the same decision, but why?  It's something that I've always thought about, and every time we went to a shootout at home I'd let out a big groan when Bill Murphy announced "The Panthers have elected to shoot first", but it wasn't until Wednesday when my irritation followed me into the parking lot.

I couldn't stop wondering why Peter DeBoer always chooses to shoot first when it's (so I thought) well known that the goalie has the advantage over the shooter. I decided to do a little digging and I found out that in the 5 seasons that the NHL has used the shootout, goalies have stopped 67% of the shots faced. That's better then 2 saves for every 3 shots.  And for what it's worth, this season goaltenders have the highest save % (.680) then any of the previous four seasons with the shootout.

Sending out our goalie first puts the Panthers at an advantage over the other team.  Of course, that is assuming that the goalie stops the first shot, but there is a much greater chance of that happening then there is of the Panthers scoring a goal.  After that first save is made, suddenly the Panthers are at the advantage and the shooters have a little less pressure and maybe a little more confidence.  From a statistical standpoint and from a fan who has watched every Panther game for as long as I can remember, it just makes more sense to send out the goalie first.

So now that we know how the rest of the league has fared, lets put those numbers aside.  The Panthers are tied with Boston and San Jose for most shootouts this season, having been to 11.  Only two teams (Columbus and Dallas) have lost more shootouts then the Panthers, who have lost 6.  Looking deeper into the Panthers shootout stats, we see that they started off with a bit of success, winning 4 of their first 5.  Since then however they have lost 5 of 6.

In the 4 shootouts where the Panthers have had to shoot second they have gone 3-1.  I just don't understand the logic for Cats to repeatedly shoot first when it's so obvious that their players just are not good at the shootout.  As a team, Florida has scored on only 11 of their 39 opportunities.  Only twice have the Panthers scored more then once in a shooout; the season opener against the Blackhawks (win) and last Wednesday against the Capitals (loss).

The more I think about it, the more it just doesn't make sense.  A team like the Panthers that has been notorious for struggling in shootouts should embrace the statistics and play the odds every time.  We all know how every single point counts and the Panthers owe it to themselves to do the right thing.  Before I wrap this little rant of a blog up, while I was doing my shootout research I write down how our Panthers have fared statistically.  Now I'm warning you, the numbers aren't pretty.  Ok, here we go...

Steven Reinprecht not only leads the Panthers with 11 shots, but he also leads the NHL.  He is the only Panther to shoot in every shootout this year.  I'm not sure why as he's only scored 3 times, and just once in the 6 shootouts since November 14th.

Rusty Olesz is 2nd on the team and 4th in the league with 8 shots, and he's only scored twice.  Once in Dallas on October 30th and again at home on December 7th against Edmonton.  That's over a month (and 6 shootouts) in-between goals.

Nathan Horton has the longest current streak of missed shots, getting stopped on 4 in a row.  He's been stopped on 5 of his 6 opportunities.

Stephen Weiss has been sent out 6 times, including the last 5 shootouts the Panthers have been lucky enough to make it to.  He's 2-of-6, but he has a 1 game in a row streak to boast about.

He shares that honor with Michael Frolik.  He's only been sent out twice and has scored 50% of the time.

I'll finish up with our goalie, Tomas Vokoun.  He's tied for the NHL lead for shootout appearances with 9, but he's won only 3 of them.  Only Steve Mason of Columbus has dropped more consecutive shootouts (6) then Vokoun's 5 straight losses.  He has stopped 28 of 39 shots, a .718 save% (which is much better then the league average of .680%).  Another reason to start the shootout with your best shootout preformer?  One would think so...

I hope that this blog gave you some kind of insight into the way I've been thinking.  It's hard enough being one of the many die-hard Panthers fans and watching our team come up short of the finish line time and time again.  It's another story when I feel that the team is hurting themselves in ways that can be totally avoided.  Whether you agree with me or not, it's hard to deny the facts.