Share All sharing options for: Rochester's Salak Attempts Between the Legs Save at AHL All-Star Skills Competition 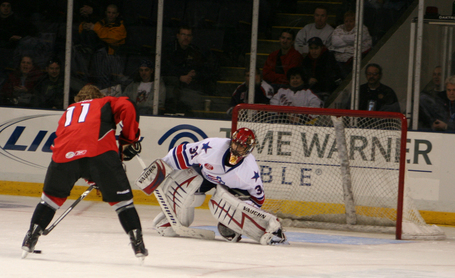 Photo by Alyssa Wozniak of LetsGoAmerks.com

Florida Panthers prospect Alexander Salak is not only an excellent goaltender but a great entertainer as well.  During the 2010 AHL All-Star Classic skills competition Alexander Salak attempted this between the legs glove save against Tyler Ennis of the Portland Pirates.  It was the only goal Salak allowed during the Breakaway Relay.

During the All-Star game itself Salak had another highlight moment when he caught the puck with his glove and rather than dump it over to a player he did a drop kick and sent the puck about 15 yards towards the blue line.  After the game I asked Salak about it and he said, "Maybe I'll try it in a game sometime."  Salak had another highlight moment when he made three great saves and as the crowd was acknowledging him he stood and waved back with his glove.