Share All sharing options for: Panthers vs. Lightning Scoring Chances 10.16.2010

I'm about to write something I never thought I'd write when I started this project for the 2010-2011 Panthers:

For the fourth consecutive game the Panthers outplayed their opponents, and measurably so.  For the fourth game in a row, Pete DeBoer made adjustments to the forward lines, bringing Steve Reinprecht in on the fourth line with Mike Santorelli and Steve Bernier and he moved Shawn Matthias up to the second line between David Booth and Rostislav Olesz and it worked. 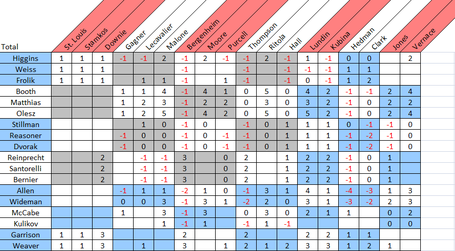