Share All sharing options for: Panthers vs. Stars Scoring Chances, 10.21.2010

Just when you thought the Panthers were about to turn a corner, they go out an lay an egg against the Dallas Stars.  Granted, the Stars came in at 4-1 and were a high-scoring team, but the Panthers had significantly outplayed their first four opponents, even though they lost two of those games.  Tomas Vokoun was pulled after the second period tonight, but I don't think much of the blame can be pinned on him.  The Panthers spent the first and second periods chasing the puck around their own zone, only getting chances on the counter-attack before the Stars would get the puck back into the Florida zone for an extended stretch.

Much of the early blame has to go to the Dmitry Kulikov - Bryan McCabe pairing as both were caught looking and reaching in the first period and the two long shifts in the Panthers zone were directly the result of Kulikov failing to move the puck or win a battle.  Aside from the Kulikov - McCabe pairing the rest of the team was mediocre to average except for Steven Reinprecht and Steve Bernier.

Four of the five Panthers' chances in the first were on the counter-attack as the team wasn't able to sustain any pressure on the Stars in the first and second periods.

The Panthers were able to put up four of the last five chances to make the totals look respectable, but those chances came with the team down 4-0.


Reinprect and Bernier had tough nights, as did the Kulikov - McCabe pairing.  Maybe DeBoer should've left well-enough alone and kept Wideman-Allen and Kulikov-McCabe together and allowed Weaver to play with Keaton Ellerby, but offer the latter some additional shelter from the Stars' top lines? 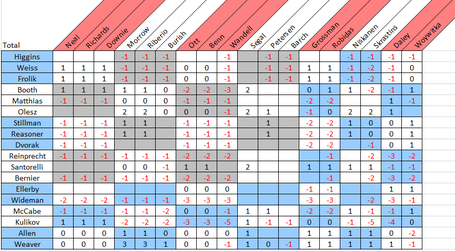 Florida needs some defensive depth and if Reinprecht is still in the doghouse, they should look to deal him for a defender as soon as possible.