Share All sharing options for: Panthers vs. Islanders Scoring Chances, 10.23.2010

The Panthers got back on the winning track against the Islanders, but John Tavares single-handedly exposed some flaws in Florida's defense.  The coverage in front of Tomas Vokoun was horrendous all night long and nearly every rebound Vokoun kicked out was quickly gobbled up by an Islander, usually Tavares, and fired right back on goal.  I don't know if the poor coverage is a by-product of Jason Garrison groin injury or if this is just a defensive failure on all fronts, but if the Panthers are going to play a slow and meted style on offense, they need to be better on defense.

Aside from the terrible coverage, there were a couple of defensive positives by my eye, namely Dmitry Kulikov and Keaton Ellerby.  The two youngest members of the Panthers had strong nights, with Kulikov having his best game of the young season.  The forwards were in a bit of flux with Shawn Matthias out of the lineup, but out-of-nowhere defensive demon Mike Santorelli continued his high level of play in all zones.

Corsi
A quick note on Corsi.  Keaton Ellerby led the Panthers in Corsi with a +8, interesting because the Panthers were a +8 as a team on the night.  Ellerby was calm and measured and didn't try to do too much -- I noted a couple of plays were rather than try to make a pass or a play, he simply threw the puck into the corner for the forwards and got back into position.  He's learning on the job and he's not hurting the Panthers right now.

The scoring chances match the scoreboard on this one, for the most part.  It was a very even game throughout with the Panthers losing the scoring battle by a chance. 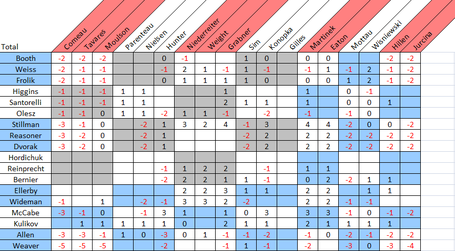