Share All sharing options for: By The Numbers: Panthers vs. Maple Leafs Scoring Chances, 10.27.2010

Sometimes, you're just unlucky.  Although the Panthers lost 3-1 to the Maple Leafs last night, they weren't outplayed by any means.  The scoring chances were mostly even, and as Donny showed you last night, the game-winning goal was an atrocity of officiating, and a couple of Panthers had their best games of the young season.  In the end, with the Panthers pushing for a tie, Pete DeBoer called on the veteran line of Cory Stillman - Marty Reasoner - Radek Dvorak.  The three of them put together a simply magnificent shift.  Not only did still get revenge (check the photo) for Orr's hit on Scott Clemmensen, but the three vets held the puck in the zone for one minute and twenty-six seconds.  They did so against the Leafs' top line of Nikolai Kulemin - Tyler Bozak - Phil Kessel.  They had multiple shot attempts, but only one scoring chance, and when the Leafs finally got the puck out, it was on the stick of Phil Kessel who broke in on Clemmer to ice it.  Check the shift chart below, scroll all the way to the right.  The players are drag and drop, so you can put the lines together.

The pairing of Dmitry Kulikov and Bryan McCabe had their best game of the year, and if you don't believe me, check the Corsi chart below.

They were able to do so because the return of Jason Garrison moved the Kulikov - McCabe pairing down the list and they received most of their ice time away from Toronto's top line.

I've now tracked about forty games and the first period in last nights game had the fewest scoring chances of any game I've ever tracked.  The Panthers' suffocating defense and the Leafs' inept offense were on display as the Panthers held the Leafs without a scoring chance at even strength.

Notice that DeBoer is still trying to find a way to get Stephen Weiss, David Booth and Michael Frolik going on offense.  He split them up and moved Bernier to Booth's line.  Apparently, Jason Garrison did mean that much to coverage down low for the Panthers.

The Panthers ran off six chances in a row in the second period.


Kulikov and McCabe's strong games are also reflected in the scoring chance totals. it was a tight checking game where the Panthers relied on their system and their defense, but it's got to be killing DeBoer to see Weiss held without a scoring chance at even strength. 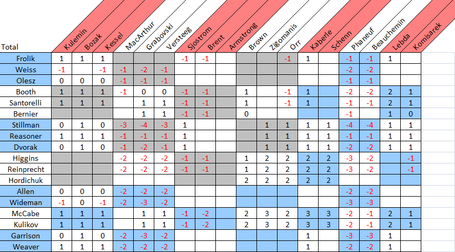 Though Kessel potted the goal at the end of the game, it was the Leafs' second line that was generating chances and it was at the expense of the veteran line and Allen-Wideman and Garrison-Weaver.