Share All sharing options for: By the Numbers: Panthers vs. Maple Leafs Scoring Chances, 11.10.2010

Tonight's game is what I think of when I think of Panthers hockey.  If a person unfamiliar with the team asked me what sort of game Florida plays, I'd tell them to watch the tape.  Yes, it was Toronto, and no, they didn't have the benefit of an official looking everywhere but where the goalie was being tackled, but the Panthers executed their game plan perfectly.  No team in the NHL is as strict as the Panthers when it comes to moving north and south up out of the zone and through the neutral zone and the entire game was spent doing just that.  The Panthers are one of the best positional teams on defense and when they are on, their defense is excellent in front of the goaltender.  They were on tonight.  They limited the Leafs to shots from the perimeter and were quick push rebounds to the side walls and up and out of the zone.

If you're not used to a methodical, low-event first period by now, you're never going to be.  The Panthers once again controlled play in the first period and limited the game to the neutral zone and perimeter.


The Veteran Line played a strong defensive game - they didn't generate any chances, but they only gave up one chance in twelve minutes. 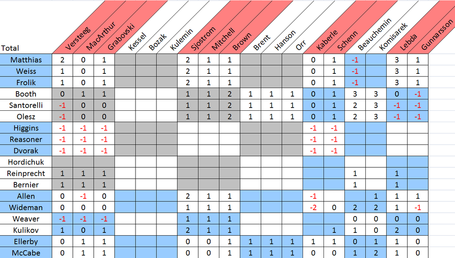 Black throughout the matrix is always a good thing and the Santorelli line was excellent throughout.