Share All sharing options for: By the Numbers: Panthers vs. Wild Scoring Chances, 11.12.2010

What a defensive effort.  When they weren't pinned down in their own end, the Wild spent the entire game stuck on the outside of the rink throwing shot after shot wide or into the pads of a defenseman.  The Panthers team defense looked better on Friday than at any point thus far in the season.

Three even strength chances total for the Wild and three on the power play.  The Wild were stymied for the entire game.

To give you an idea of the requirements difference for a chance, the Minnesota broadcast team had this one scored 18-12 Florida.

Though the Panthers only had 14 total chances, I think this is the exact type of game DeBoer wants to play - low event, low chances, low goals.  It might not be good for attendance, but it's been a really effective thus far for the Panthers.


When the worst player on the team is +1 at chances, your team has had a magnificent game. 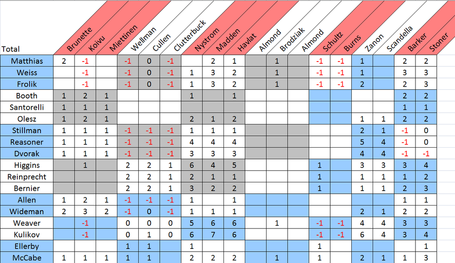 The Panthers absolutely pasted the Wild's checking line.  As I was watching the game I noted that John Madden looked really slow so maybe this was just an off night.