Share All sharing options for: By the Numbers: Panthers vs. Flyers Scoring Chances, 11.13.2010

This was not good.  The Panthers were the exact opposite of the team we saw against the Wild - chasing the puck, getting caught out of position, reaching instead of skating and generally playing a style of hockey that probably drove Coach DeBoer nuts.  I think we can give them a pass on this one though.  Let's blame it on the second half of back-to-back games being on the road, or we can lay the blame at Lady Gaga's feet.  Honestly, can any of you stand those commercials anymore?  Twice a period is a little much.  I can't wait until that show is over and I don't have to hear her strange imitation of a car revving up.

On thing about the game though - anyone know why DeBoer didn't pull Clemmensen during the power play to end the game?  He had a faceoff in the Flyers end to begin a power play down three goals.  Seems like the perfect time to make it 6 on 4.

The chances look close, but consider that 9 of Florida's chances came after they were down 3-0, 8 of those at even strength.  Score effects played a part in this one so don't read too much into this.

There are some long periods of Philadelphia domination here. 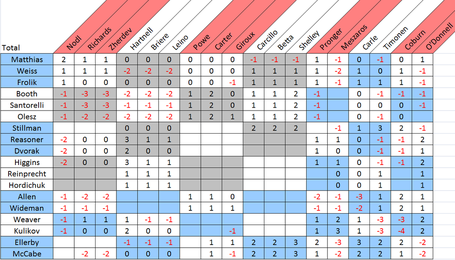 Even with the score effects evident, the top two lines did not have a good night.