Share All sharing options for: By The Numbers: Panthers vs. Senators Scoring Chances 10.28.2010

Ed. note: we're a bit late on this one, but it's nonetheless a fascinating character study when compared with the effort put forth in Saturday's stunning victory over Montreal. - DR
*
The Panthers played their worst period of the season and their worst game of the Senators.  The second period was brutal, the Senators had seven scoring chances in the final seven minutes of the period and Florida was coughing up pucks to set them up.
Once the Senators were up 5-1, score effects kicked in.  The Senators played a defensive game and the Panthers turned up the pressure trying to get back into the game.  The one good thing about the Senators game is that the Panthers created 19 total scoring chances and 17 at even strength -- both season highs.  Unfortunately, 11 of them came after they were down 5-1.  The Panthers also surrendered 17 total scoring chances -- a season high.  11 of those came in the first two periods. 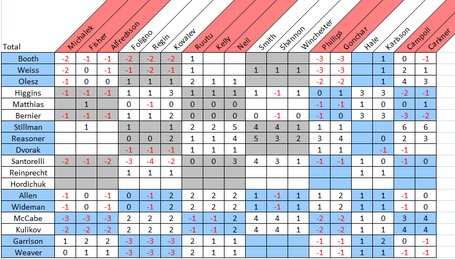