Share All sharing options for: By The Numbers: Panthers vs. Canadiens Scoring Chances 10.28.2010

No Stephen Weiss, playing in Montreal, on the last game of a road trip, against a team on a winning streak all but guaranteed another Panthers loss, right?  No sir, the Panthers got back to their tight checking, safe offense system and strangled the life out of the Canadiens.  The Panthers were outchanced overall, but actually won the battle at even strength.

The star of the night was Tomas Vokoun as he stopped nearly everything the Canadiens threw at him, including six power play scoring chances in the third period, three of them on a 5-on-3.

The lines started like this, but except for the Veteran Line, they didn't stay this way.  I thought it was an odd choice to move Olesz down to the fourth line as he's still the forward creating the largest amount of scoring chances. 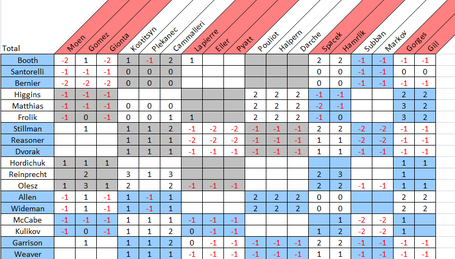