Share All sharing options for: By the Numbers: Panthers vs. Bruins Scoring Chances, 11.18.2010

What a gut punch.  The Panthers outplayed the Bruins for 55 minutes and lost 4-0.  More than half of Florida's chances came on the power play, and none were converted.  Florida's power play is an anemic 29th in the league, and the special teams are saved by the incredible penalty kill.

It was a low-event night, which is fine and dandy unless you go ohfer on the power play. 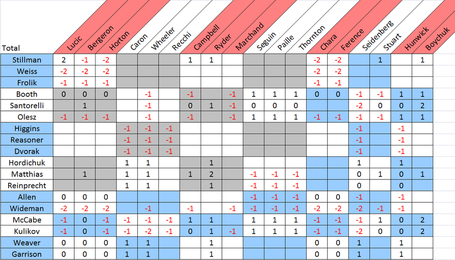