Share All sharing options for: Florida prospects close out World Junior A Challenge 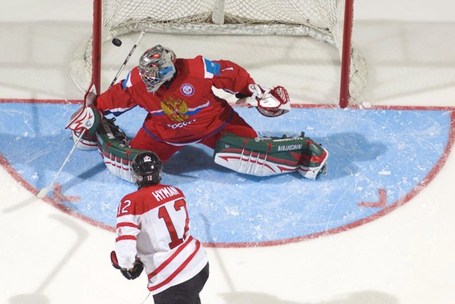 Florida 2010 fifth-round selection Zachary Hyman scores against Russia during the World Junior A Challenge from Penticton, BC.

The gold medal ultimately was taken home by Team USA - for the third straight year - but the Panthers were well represented by a pair of prospects from each of the Canadian entrants: Eastern forward Zach Hyman tied for 3rd overall in scoring with five points (2g-3a) in 5 games, capturing player of the game honors in a quarterfinal match against Russia. The Eastern club won the tourney's silver medal after a 6-4 U.S. victory.

Defenseman Ben Gallacher (FLA fourth-round pick in '10) picked up two points (1g) for Canada West, which came up just short of the bronze in a rough 8-3 loss at the hands of  Switzerland.

Through Friday's games, the Panthers pair are having exceptional regular seasons with their junior teams: