Share All sharing options for: By the Numbers: Panthers vs. Islanders Scoring Chances, 11.20.2010

The Panthers second period against the Islanders was frighteningly similar to the third period against the Bruins.  The Panthers had six even strength scoring chances and converted four of them.  At the end of the second period, overall chances were 13-11 and even strength chances were 10-9, both in Florida's favor.  The score, however was 4-1, Florida.  The third period look just like every other third period this season - the DeBoer death grip was implemented and the Panthers packed it in and rode the clock out.

Stephen Weiss leads the way because he was injured before the Panthers decided to sit back and burn the clock. 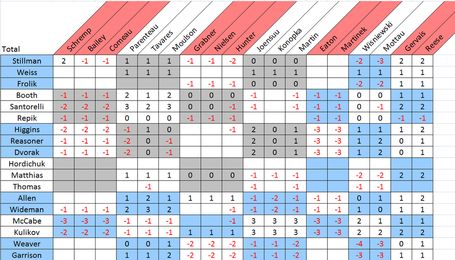