Share All sharing options for: By the Numbers: Panthers vs. Penguins Scoring Chances, 11.22.2010

Of course the Panthers lost tonight - they the most consistently inconsistent team in the league.  Even the individual periods mirrored the Panthers' season.  The first period was all Pittsburgh, the second all Florida and the third was an up and down affair bereft of real scoring chances.

Shawn Matthias remains in the doghouse as DeBoer tries to balance his lines without Rostislav Olesz and Steven Reinprecht. 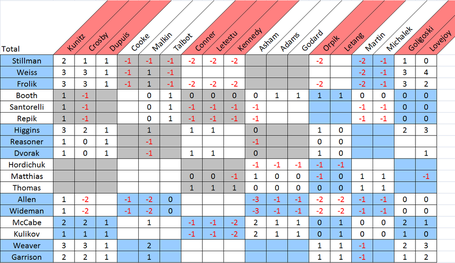 Bryan Allen and Dennis Wideman took it on the chin in this one, mostly from the Evgeni Malkin - Sidney Crosby - Aaron Asham line.  The good news is Cory Stillman - Stephen Weiss - Michael Frolik were able to play with the Crosby line to start the game.  The Panthers really missed Olesz in this game - he's been the guy generating the most chances all season long.