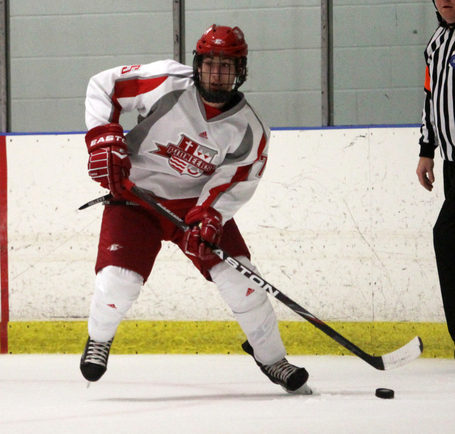 Panthers' 2010 seventh-round selection R.J. Boyd became only the second Florida born-and-bred prospect to be drafted by a National Hockey League organization. Though West Palm Beach was his place of birth, Boyd relocated to Florida's west coast early, taking advantage of local youth hockey programs inspired in large part due to the groundwork of clubs such as the Panthers and, of course, the Lightning.

Despite not hitting the ice until age ten, Boyd did have a history in roller hockey, allowing for a natural - albeit speedy - progression. A defenseman, he participated for a number of years with the Florida Eels of the Southwest Florida Youth Travel Hockey Association. R.J. went on to play high school hockey at Cushing Academy in Ashburnham, MA, collecting 38 points (6 goals) and 35 PIM in 101 games under head coach Rob Gagnon.

Boyd is currently in his first year with Sacred Heart University of Fairfield, CT, where he has compiled 4 points (1 goal) in 14 games on the young season as a member of the Pioneers.

R.J. was kind enough to spend a few minutes with us recently for a quick Q-and-A session after the jump...

LBC:  When did you move from Palm Beach County to the west coast of Florida?

Boyd: I moved over there when I was about three; still very young. Then we moved to Sarasota when my Dad's office went to Fort Myers, so right now (the family is in) Fort Myers.

Oh yeah, I worked out at the Everblades' rink over the summers when I (still) lived in Florida, before prep school. So I caught a couple of games. Good stuff.

We know each other a little bit. We played against each other when we were younger, then we went into seperate leagues when I turned fifteen and went to prep. But I haven't seen him since then.

Catch any local games now that you've got a variety of professional clubs in the northeast (AHL and NHL) to choose from?

I've seen one Sound Tigers game, and since I've been to prep I've been to a couple of Bruins games since they're close to the area.

What was your favorite pro team while growing up?

Detroit. My Dad's from Michigan. I was a big Red Wings fan.

Whom do you most closely model your playing style after?

I try to model my game after (Nicklas) Lidstrom, but really I just try to keep it simple: solid, stay at home defenseman.

Have you met any Panthers players/execs since draft day?

No I haven't, actually. But I'm going to meet all of the guys at the Rookie Camp in July.

Set the stage for us when you received your call on draft day:

The Panthers had earlier said that I might be a later-round pick; I if I got picked it would be great, but I really wanted to see a lot of my friends get drafted. So my family and I sat at Hooters from 2 to 5 waiting for the draft to end and the last pick comes up for the Panthers (in the seventh round). I'm starting to get goosebumps and then it happened. It was a great feeling. My family advisor called me, then I spoke with Mr. Tallon, Mr. Luce, and Mr. Yandle and they congratulated me, welcomed me to the Panthers family. It was, really, so awesome of a feeling.

Ever partial to the Lightning, given your west coast roots?

My little brother played with (former Bolts captain) Brian Bradley's son, so we used to watch Bradley play with the Lightning on the weekends. He was pretty close with us, and John Tortorella's son played on the team above me, so I did see some of their games. It was pretty cool.

Biggest influence on your career to this point:

My prep coach (at Cushing Academy), Rob Gagnon. If it wasn't for him I don't think I'd be any near where I am right now.

Sounds like a silly question, but have you been to a Panthers game?

Oh yeah. I still have family on the east coast so we'd usually stop in and watch some Panthers games before heading back home. I've probably been to three or four games; it was always fun. (At this point Boyd mentioned the long-retired giant swollen panther cranium which was used during player introductions: "That's how long since I've been to a game.")

Where is your draft sweater located now?

We have a room in our house where all of our awards are kept. My brothers play hockey, and my sister plays hockey, so all of our awards, like best defenseman and MVP awards and stuff like that are all together in that one room for all our achievements. (It'll be) pretty cool to see it framed at home. Eventually (laughs).

Among your siblings, any on the same path, professionally?

Both of my brothers go to Cushing Academy; I have a brother that's a year younger than I am and he's talking to (a few schools). I know that the Dallas Stars like my brother a lot. It might happen. Don't know yet; it's too early in the (prep) season to tell. If he has a good year it might happen.

Right now, what aspect of your play do you wish to most improve upon?

Just to be a better hockey player. To be able to read plays faster, see things happen before they happen. That's my biggest goal right now.

You're wearing #75 with the Pioneers. Any particular significance?

I wanted seven and it wasn't available here, same with number five. I joked that "Okay, I'll take 75" and they took it seriously.

Any surprises so far after making the jump to collegiate hockey?

Coach (C.J.) Marottolo, this is his first full year here at Sacred Heart; he came from Yale, so we're a "young team" in the sense that we're all learning new things, new systems. We have a lot of freshman and a lot of stuff to work on. The level of play I totally expected to be this high, but I think I've adjusted to it pretty quickly.

Our sincere thanks to R.J. and the Sacred Heart University staff for their kind assistance with this article.