By The Numbers: Panthers vs. Thrashers Scoring Chances 11.3.2010

Share All sharing options for: By The Numbers: Panthers vs. Thrashers Scoring Chances 11.3.2010

It was just one of those nights.  The Panthers did everything right and still lost.  They dominated the game like Atlanta was an AHL team and couldn't catch a break.  Though the scoreboard showed they lost, Florida was clearly the better team in this game.

Stephen Weiss was back, and though he was sent to the fourth line, he looked like the Stephen Weiss we've come to know and he brought Michael Frolik back from wherever the two had been hanging out during October. 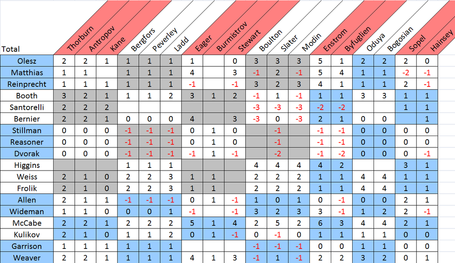