Share All sharing options for: By the Numbers: Panthers vs. Hurricanes Scoring Chances, 11.5.2010

I know that the story of the game was Stephen Weiss, but the two true stars of the game for the Panthers were Cam Ward and Marty Reasoner.  Ward was abysmal, even though it was Tomas Vokoun who was pulled early in the game.  The Panthers had 29 scoring chances and 10 of them came on rebounds.  Ward's rebound control makes Nikolai Khabibulin look like Terry Sawchuk. The Panthers completely dominated the game, but Ward did himself no favors in this one.

Reasoner was amazing in this game.  He was one for nine scoring chances for and only one against at even strength.  He played 3:24 short-handed and didn't surrender a chance against during that time.  At one point in the third, he was solely responsible for clearing the zone on the penalty kill, and in two of those instances, he was battling one-on-two against the Hurricanes.  This was just an amazing game for Reasoner and the new Veteran Line as a whole.  After Stillman's injury, Higgins filled in and that line didn't miss a beat.  If Stillman is out for any length of time, I expect Higgins to fill in.  We talked about Higgins' defense in our first ten recap, and his game meshes nicely on that line.

It's not often a team gets a win when they pull their superstar goalie, but the Panthers were able to do just that.  The Hurricanes should've thought about doing the same.

This game was like the Atlanta game, only better.  The Panthers just thoroughly dominated the Hurricanes from start to finish.  In fact, their game was so dominant that the Hurricanes couldn't even generate chances when they were down by two goals -- the Panthers completely negated any score effects in this one.

There are just long periods of dominance here and Carolina could do little to stop it.

.Utter domination up and down the lineup by every line and pairing except for the fourth line of Shawn Matthias and Mike Santorelli.  Vokoun gave up goals on his only two chances against and Reasoner's 9-1 ratio is simply amazing. 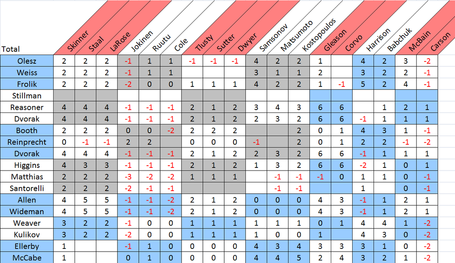 The Staal line was fed nothing but chances against by everyone DeBoer threw at them.  The only Carolina line with their head above water was the Tuomo Ruutu line.