Share All sharing options for: By the Numbers: Panthers vs. Hurricanes Scoring Chances, 11.6.2010

After the offensive outburst Friday night in Florida, it looked like the Panthers were going to bury some of the chances owed to them after their month of bad breaks.  Unfortunately, this was not the case last night in Raleigh.  The Hurricanes were happy to play Florida's typical straight-ahead, tight-checking style and wait for their opportunities.  The Panthers took forever to find their game, and even when they did, they weren't putting the puck on net like the previous two games.  The Hurricanes got a little bit of help from the stripes and choked the life out of the Panthers.

One chance.  There was one total scoring chance in the first period and it belonged to Carolina.  The rest of the game reads like a typical Florida game, but the first period was brutal to watch.  The Panthers were even at even strength, but the second period 5-on-3 did them in.

The Hurricanes and Panthers played thirty-five minutes of hockey before the Panthers recorded a chance.  The sudden burst of offense was gone just as quickly as it appeared.

The Veteran Line had year another outstanding game, but the Booth line was beaten by the same margin. 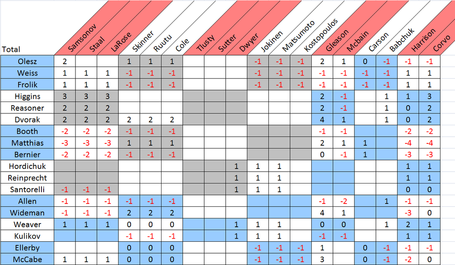 The Veteran Line did their damage against Carolina's top line, but the Booth line was beaten by that top line.