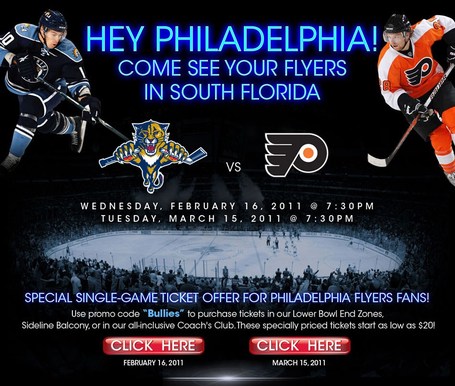 Why go to the time and effort in creating a splash screen for yet another timely ticket promotion - starring Claude Giroux, for some reason - when all that's visually necessary is this: 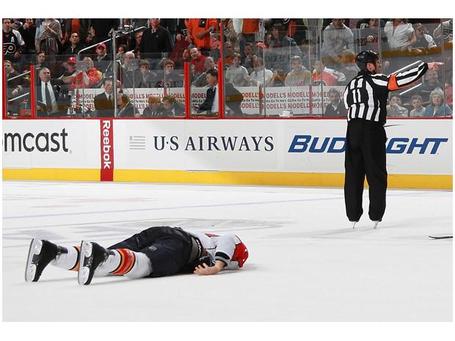 This latest promo took on a life of its own on FaceBook this morning, being understandably difficult for Florida fans to argue in favor of a ticket push aimed at Flyers Faithful after what went down on October 26th, 2009.

The Montreal, Pittsburgh, New York, et al programs were enough to baffle our imaginations during the earliest stages of the season, but to follow up with what is quite possibly the most offensive and shameless pimping of the franchise's darkest days in recent memory is flat-out insulting and worthy of whatever mockery the organization rightfully endures. Freaking embarrassing.

Yes, it's been over a year since Mike Richards' "legal"-at-the-time attempted decapitation of Panthers forward David Booth, and while many players on both sides have deemed the incident "old news", it's controversies such as this which live on for years in the collective mind of the fans. That's just how it is, and clubs should be, at the very least, cognizant of it. No evidence of that realization here at all. Utilizing Booth's image in the ad is simply disgusting.