Who's in town again?

Share All sharing options for: Who's in town again? 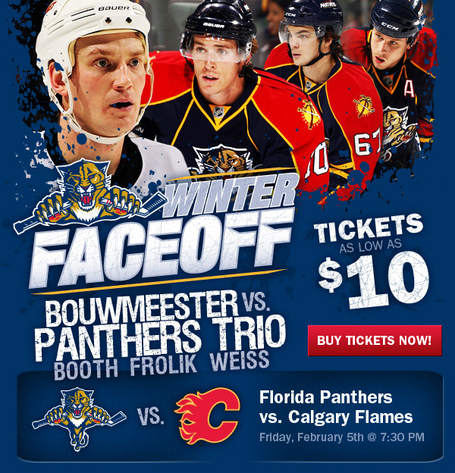 I don't know why but this intro page to the Cats' official site troubles me.

Of course, I wish hattricks upon Thy Trio, but it just comes off as wrestling-style propaganda. There's nothing inherently wrong with it, but it seems more - or maybe less? - could have been employed here.

Yes, it's only advertising. Advertising that looks beyond the hardcores like you and I. We don't need it, obviously.

Let's go overboard and take it far too literally: Is the organization implying it will require the combined efforts of Florida's top three (healthy) forwards to defeat a single Calgary defenseman? With the Panthers scoring so lttle of late, perhaps they're simply being honest.

If you had to promote it, is the above the way to go, or is a different direction in order given the "unusual" nature of this evening's matchup?

Secondly...is anyone bemoaning the lack of Olli Jokinen tonight?