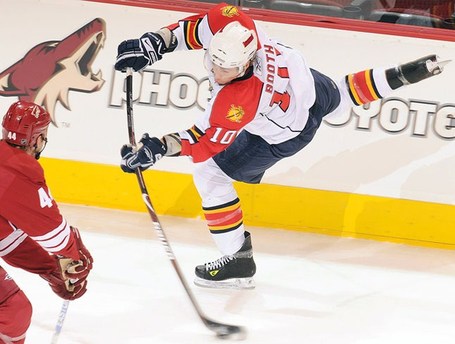 Whatever the Ultimate Plan may be for this franchise, whether a retool, rebuild, or simple tweak, they still have a schedule to finish out. And they aren't going to add many points to their current 66 if Florida's "headliners" continue targeting knees, chests, and goalposts over the final fourteen matches of the 2009-10 season.

The guy above has one assist (-1) in his past five games. Linemate Stephen Weiss has no points (-2) in the same period. Michael Frolik? Two goals (-1). This is the Florida Panthers' first line.

Meanwhile, Coyotes captain Shane Doan has three assists in his past three. All victories. Goaltending's been ok too. And speaking of Bryzgalov, how 'bout that new mask?

The possible return of forward Nathan Horton tonight would surely shake a few leaves from the tree, as Frolik is muscled out simply by default. If the goal for this club is a playoff appearance, experimentation on the lower three trios will be a must.

Phoenix has won six straight while continuing their assault on the top spot in the Western Conference; believe it or not, the Coyotes are a mere five points behind San Jose (and perhaps Chicago at press time) for first place in the Campbell. No matter: only two clubs stand directly in the Desert Dogs' way. A victory in Sunrise is very much on their agenda. Ownership issues be damned, coach Dave Tippett is among the best.

UPDATE: Horton will make his return tonight on the first line.