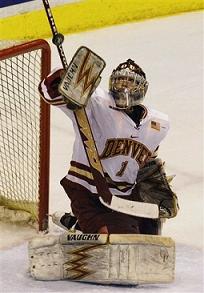 The Panthers' seventh-round pick in 2006, goaltender Marc Cheverie has been tearing up the WCHA this season, leading the (University of Denver) Pioneers with a 24-4-3 record.

On Thursday he was tabbed as the Western Collegiate Hockey Association's Player of the Year almost simultaneously with his nomination for the 2010 Hobey Baker Award for the nation's best collegiate hockey player.

As of February 17th, Hockey's Future had Cheverie ranked as the 15th best overall prospect in the Florida organization, and third among goaltenders behind (who else?) Jacob Markstrom and Rochester's Alexander Salak.

"He was a standout last year, among the NCAA's top netminders. This year, he may very well be the best...."; "All season long, Cheverie has been one of the best players overall. Now in the latter portion of the season, [he's] easily in the running for the Hobey Baker award."

Our congrats to Marc and his tremendous year. Keep an eye on SB Nation's WesternCollegeHockey for Hobey Baker updates throughout the coming weeks.