Back on the road: A Panther fan in Canada

Share All sharing options for: Back on the road: A Panther fan in Canada 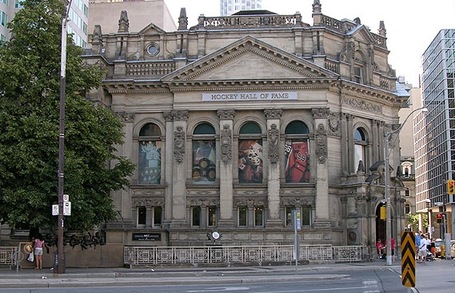 I've been uber excited for this road trip since my pop and I began planning for it last fall.  In my opinion, this is a hockey fan's dream trip.  Seeing NHL games in Toronto, Montreal and Ottawa is an amazing experience for any hockey fan, and in between those games we're going to OHL and QMJHL playoff games. All in all, it's the ultimate Canadian hockey road trip considering we're not going out west; that can be saved for another time.

It started early Monday morning, when I was up and out of the house by 7am to catch my flight out of MIA.  After arriving in Toronto and checking into our hotel, we hit the road for the 90-minute drive to Peterborough for Game 2 between the Mississauga St. Michael's Majors and the Peterborough Petes of the OHL.  We had seats in row 2 behind the Petes bench, which made the experience much better.

The refs made several ‘questionable' calls that went against the home team, and being able to hear every word in the exchanges between the Pete's coaching staff and the officials was really cool.  The local fans were just as bad, but that just added to the whole ambience.  Mississauga controlled the game from start to finish, and it would have been worse then the 2-1 final if the Petes goalie didn't stand on his head, making 36 saves.  The Arena was pretty cool and very unique.  Unfortunately, I can't get pictures from my camera onto my computer right now, but click here for some pics and info about the arena, the Peterborough Memorial Centre.  The pictures are definitely worth checking out.

Tuesday began with a short 2-block walk to Wayne Gretzky's Restaurant for lunch.  The memorabilia in there was really awesome.  They had just about everything you could imagine from the Great One's career, from his days in pee wee all the way up to his involvement with Team Canada in the Olympics.  They even had the sweater he wore in the 1997 Playoffs when he scored a hat trick against Philly, which reminded me of the trick he had against Beezer and the Panthers earlier in those playoffs.  Game 1 of that series was the last time our Cats tasted playoff victory; April 17th, 1997 is a date that's been cemented in my head for a while.

After that we hit up the Hockey Hall of Fame, where I spent several hours looking through all the history and memorabilia.  They had an awesome display up that featured medals (gold, silver and bronze) from every single Olympics since 1896, although that year they only awarded two kinds of medals (silver and bronze).  They also had the ‘lucky loonie' from the 2002 Salt Lake City Olympics and the Gold Medal winning puck from Vancouver, of course.

The rest of the hall was awesome; I got to take pictures with the Stanley Cup and wearing Patrick Roy's old pads in the Montreal Canadian's dressing room.  Panther-wise, there was actually a painted rat and a coke bottle from the 1996 playoffs, as well as a mini Beezer helmet.  I also learned that there are three people with Panthers ties that are in the Hall of Fame: Bobby Clarke, Billy Smith and Igor Larionov.  I also ran into a couple of Florida fans who had won a contest with the Panthers that brought them up to Toronto for the game.  Small world, eh?

At night it was off to the Air Canada Centre for the Panthers-Leafs game.  I knew that there would be a big crowd, but every seat was filled by the time both anthems were finished.  Despite that both teams are having pretty awful years, nobody in the arena seemed to care.  It's exactly what I expected, with everybody into the game.  Every offside, penalty, shot on goal...everything produced a reaction from the fans.

Nobody seemed to care that we were rooting for the Panthers, and I saw several Cats jerseys while walking around before the game and in between periods.  I did see one Leafs fan get ejected, but it had nothing to do with us.  Probably had more to do with the 2 beers in his hands as he was escorted out, lol.  As for the game, if you were watching it then you know how great it was from a Panthers standpoint.

While the Leafs had more shots, the majority of them were from the outside.  Florida's Scott Clemmensen had more saves, but Leafs goalie Jean-Sebastien Giguere had to make much tougher ones.  It was cool hearing the boo's raining down from all the fans every time Bryan McCabe touched the puck, and the loudest cheer of the night came when McCabe hit the ice after a check in the 3rd period.

The arena itself was very nice.  Our seats were in the 300 level, in the corner of the Panthers shoot-twice end.  They were the ‘worst' seats of all the games we are going to on this trip, but they were the most expensive.  The concourses were nice and wide, and there were plenty of food and beer vendors.  I'd give the selection a 6 out of 10, as there were several different things to choose from but nothing that jumped out at us; for the most part, just your run of the mill arena food.

Tomorrow we head east to a town called Gatineau in Quebec.  We'll be seeing game 4 in a series between the Gatineau Olympiques and the Montreal Juniors of the QMJHL, with Montreal leading the series 2-1.  We will also be going to Game 5 of the series in Montreal on Friday night.  Thursday and Saturday we'll be at the Panther games in Montreal and Ottawa before heading back home on Sunday.  My next entry will be Thursday night after the Cats-Canadians game.  Thanks for reading...Go Cats Go!!!